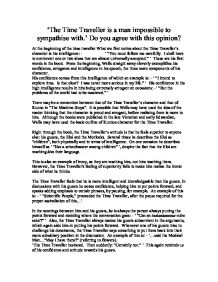 'The Time Traveller is a man impossible to sympathise with.' Do you agree with this opinion?

`The Time Traveller is a man impossible to sympathise with.' Do you agree with this opinion? At the beginning of the time traveller What we first notice about the Time Traveller's character is his intelligence: - ` "You must follow me carefully. I shall have to controvert one or two ideas that are almost universally accepted." ' These are his first words in the book. From the beginning, Wells straight away cleverly exemplifies his confidence, arrogance and intelligence in his speech, the three main components of his character. His confidence comes from this intelligence of which an example is: - ` "I intend to explore time. Is that clear? I was never more serious in my life." ' His confidence in his high intelligence results in him being extremely arrogant on occasions: -` "But the problems of the world had to be mastered." ' There may be a connection between that of the Time Traveller's character and that of. Kunno in "The Machine Stops". It is possible that Wells may have used the idea of the reader thinking that the character is proud and arrogant, before realising there is more to him. Although the books were published in the late Victorian and early Edwardian, Wells may have used the basic outline of Kunnos character for the Time Traveller. ...read more.

Therefore, it is ironic when he wishes that he had brought a camera with him, when he has travelled into the future. When he is ready to go, he has panicky, second thoughts - ` "I suppose a suicide who holds a pistol to his skull feels pretty much the same wonder at what will come next..." ' So for all his intelligence, confidence and knowledge, the Time Traveller lacks much common sense. He is therefore arrogant, over-confident and under-prepared going into new situations. This makes it difficult to sympathise with him when things start to go wrong. It is easy to see that the Time Traveller is intelligent, but he can become irritatingly smart. For example: ` "...I had a score of noun substantives at least at my command; and then I got onto demonstrative pronouns, and even the verb `to eat'." ' ` "My museum hypothesis was confirmed." ' This is pretentious; and it is probable that the reader is led to dislike the Time Traveller; so that when he gets into tricky situations, the reader is not meant to feel too much towards him. It is only halfway through he book that the reader can start sympathising with the Time Traveller. ...read more.

' The Time Traveller might want revenge for whatever has happened to Weena, but still lacks common sense, and ` "not realising their blindness," ' he ` "struck furiously at them." ' Although he instantly regrets this, which is, again, quite ironic. Furthermore, the different sides of his character can be linked when he is in the Palace of Green Porcelain. There he describes Weena as quite unintelligent, but two pages later, he almost praises her for making him realise that the floor sloped down underground towards the Morlocks. Here the Time Traveller treats the Eloi's intelligence with his usual disdain and condescension, but praises Weena, an Eloi, indicating that he likes her. The Time Traveller is not a very sympathetic character, but it is possible to sympathise with him. I believe it is definitely Wells' intention to make the reader change his or her view about the Time Traveller, and to become more sympathetic towards him. Throughout the book, the Time Traveller is arrogant, over-confident and lacks common sense. Until his relationship with Weena begins, it is very difficult, if not impossible, to gain the reader's sympathy. There are some subtle remarks made by the Time Traveller about his relationship with her, but he does not consciously realise that he likes her until her disappearance. Only then he actually realises her affection for her. Due to his continued arrogance, however, it is not possible to sympathise a great deal with him. ...read more.