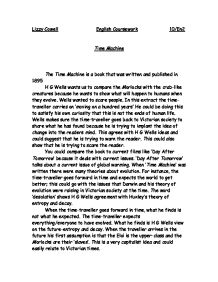 Lizzy Cowell English Coursework 10/En2 Time Machine The Time Machine is a book that was written and published in 1895 H G Wells wants us to compare the Morlocks with the crab-like creatures because he wants to show what will happen to humans when they evolve. Wells wanted to scare people. In this extract the time-traveller carries on 'moving on a hundred years' He could be doing this to satisfy his own curiosity that this is not the ends of human life. Wells makes sure the time-traveller goes back to Victorian society to share what he has found because he is trying to implant the idea of change into the readers mind. This agrees with H G Wells ideas and could suggest that he is trying to warn the reader. This could also show that he is trying to scare the reader. You could compare the book to current films like 'Day After Tomorrow' because it deals with current issues. ...read more.

This could also make the reader nervous as they too don't know what is going on. The word 'uncertainly' could suggest that the time traveller has a sense of what is going on but is not totally sure. The fear and tension that the time traveller could be experiencing might transfer to the reader because they know exactly what he does-which is not a whole lot. This could be disconcerting to the reader because they would like to know what is going on but cant. Throughout the extract you get a feeling of a horrific view of what humanity has evolved into. For example, the continuous references to 'monsters' could suggest that what humans have evolved are extremely horrible. Also, the way the world has been described gives you a sense of horror. In the last half of the extract the way the world is described gives you a sense of the worlds end. This is because H G Wells describes everything as dying and it's all just not very good. ...read more.

'Towards me', at the end of the sentence we still don't know what this thing is, but the time-traveller is clearly in some kind of danger. This sentence is a great example of how Wells use of sentence structure builds up tension and fear throughout the book. When the time-traveller comes back for the first time and tells his story and continues on to disappear forever, it does not directly indicate that he went forward in time on the planet earth. He could have gone anywhere. The extract talks about a dying planet and everything on it but that could be anywhere. This could cause the reader to be confused or cautious because it doesn't give you a definitive answer of what happened. It could leave them intrigued into what happens at the end of the world. I think that Wells was successful in creating fear and tension because at many points during the book, the reader could become frightened as to what is going to happen to the world and the time traveller. ...read more.