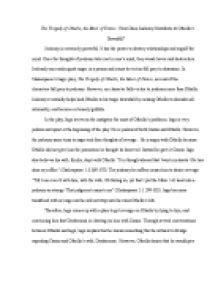 The Tragedy of Othello, the Moor of Venice : How Does Jealousy Contribute to Othellos Downfall?

﻿The Tragedy of Othello, the Moor of Venice : How Does Jealousy Contribute to Othello?s Downfall? Jealousy is extremely powerful. It has the power to destroy relationships and engulf the mind. Once the thoughts of jealousy take root in one?s mind, they wreak havoc and destruction. Jealously can easily ignite anger in a person and cause its victim fall prey to obsession. In Shakespeare?s tragic play, The Tragedy of Othello, the Moor of Venice, several of the characters fall prey to jealousy. However, no character falls victim to jealousy more than Othello. Jealousy eventually helps lead Othello to his tragic downfall by causing Othello to abandon all rationality, and become extremely gullible. In the play, Iago serves as the instigator for most of Othello?s problems. Iago is very jealous and upset at the beginning of the play. He is jealous of both Cassio and Othello. However, the jealousy soon turns to anger and then thoughts of revenge. He is angry with Othello because Othello did not give him the promotion he thought he deserved. ...read more.

This causes Othello to believe that if she deceived her father about their marriage, then she would have no problem lying and deceiving him. Iago later tells him that he is right to be concerned about Desdemona. Therefore, by inserting this doubt it allows Iago to devise a scheme to take advantage of Othello?s insecurities and gullibility. Iago feeds Othello with lies and fallacious thoughts, and Othello gobbles the lies up like candy, readily believing them. Then, little by little jealously fills Othello and he becomes enraged. Even though Othello denies his jealousy repeatedly, it is apparent that the feeling and thoughts have taken root in his mind. He tells "No Iago;/I'll see before I doubt; when I doubt, prove;/And on the proof, there is no more but this /Away at once with love or jealousy!" (Shakespeare 3.3.189-192) Since Othello believes that Desdemona is unfaithful with only suggestions, and no facts, shows he is prone to jealousy and is dreadfully gullible. Later, after Iago has planted strong suspicions in his mind, Othello goes to dinner where Desdemona drops the handkerchief that represents their love. ...read more.

These words increase the jealousy, anger and irritation in Othello, and in a way, it gives him more courage to kill his wife, which he does by suffocating her. After Desdemona?s death and Othello figures out the truth, he decides to commit suicide. When he gives his death speech, Othello tells the crowd that he wants to them to remember him not as someone who easily became jealous, but instead as someone who was misled. ?Speak of me as I am; nothing extenuate, / Nor set down aught in malice. Then must you speak/ of one that loved not wisely but too well; / Of one not easily jealous but, being wrought??(Shakespeare 5.2.352-365). He blames himself for being so foolish, but he also blames Iago. Othello?s jealousy causes gullibility and helps reveal his own insecurities, which all help lead to his downfall. Othello lets his own insecurities from jealousy keep him from questioning Iago's accusations and when finally he gives into Iago's lies, he sees what Iago wants him to see. This causes him to go mad and ultimately kill himself when he realizes the truth and what he has done. ...read more.