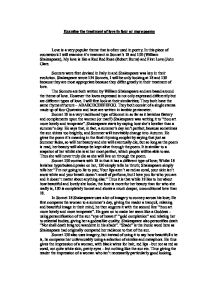 The treatment of love in four or more poems.

Examine the treatment of love in four or more poems Love is a very popular theme that is often used in poetry. In this piece of coursework I will examine it's treatment in Sonnet's 18 and 130 (William Shakespeare), My love is like a Red Red Rose (Robert Burns) and First Love (John Clare. Sonnets were first devised in Italy in and Shakespeare was key in their evolution. Shakespeare wrote 154 Sonnets, I will be only looking at 18 and 130 because they are most appropriate because they differ greatly in their treatment of love. The Sonnets are both written by William Shakespeare and are based around the theme of love. However the loves expressed is not only expressed differently but are different types of love. I will first look at their similarities; They both have the same rhyme structure - ABABCDCDEFEFGG. They both consist of a single stanza made up of four Quatrains and have are written in iambic pentameter. Sonnet 18 is a very traditional type of Sonnet in so far as it lavishes flattery and complements upon the woman (or man?) Shakespeare was writing it to "thou art more lovely and temperate". Shakespeare starts by saying how she's lovelier than a summer's day. He says that, in fact, a summer's day isn't perfect, because sometimes the sun shines too brightly, and Summer will inevitably change into Autumn. ...read more.

I have contrasted and compared the two Sonnets I will now do the same for "My Love is Like a Red, Red Rose" by Robert Burns and "First Love" by John Clare. My Love is Like a Red Red Rose is written in dialect - "'till all the seas gang dry", "bonnie lass". This could well be because Burns was poorly educated, unlike Shakespeare and never really got a hold on common English. In a way though, this helps the poem as it makes it seem more authentic - it's written in such a way that the person it's written to can put Burns' voice to it, making it's words strike a chord with the reader. My Love is Like a Red Red Rose is about the length of commitment Burns has committed to his love. At first he starts by saying "My love is like a red red rose" This is, to some extent, a double entendre - it is carefully written so that the reader may notice it whilst reading it again; in his use of the word "love" Burns is referring to both his lover and his love for her. In saying that it's like a red red rose he is saying many things with the simile - it's a very natural, romantic and tradional love, the next line "That's newly sprung in June", not only gives it a fresh feel, but also implies that it's still growing (as the rose is). ...read more.

This gives poems a "real" quality as the things described in the poems are not imaginary like they are in the other two poems. This "real" imagery and tone helps the reader to visualise the woman and empathise with the author. My love is like a red red rose and First love both have very simple rhyme schemes and rhythms; Red Red rose has ababcdedfgfghihi, and First love has ababcdcdefefghghijijklkl. Neither are in the Sonnet structure and so do not have the rhymng couplet at the end. The first two stanzas of Red Red Rose are written in the present tense, and the last two are written in the future tense. This helps Burns to really underline the point about his love being everlasting and unconditional - no matter where she is, he will still love her "Though it were ten thousand mile". All the other poems are written in the present tense as they want to convey either their love/lover's beauty at that moment in time (The Sonnets), or to put across the strength of the author's emotions (First Love). In conclusion all the poems studied treat the theme of love differently; some concentrate more on the tangible, physical side, and the others talk more about their intangible emotions and the strength of their love. The poem that I think is most different from the rest is First Love, because it is really a lot more about the author than anything else and it isn't portrayed as being an entirely pleasurable experience. ...read more.