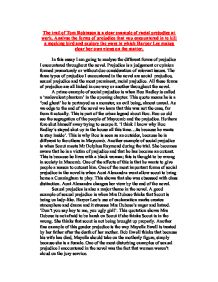 The trial of Tom Robinson is a clear example of racial prejudice at work. Analyse the forms of prejudice that you encountered in to kill a mocking bird and explore the ways in which Harper Lee makes clear her own views on the matter.

Another fine example of this gender prejudice is the way Mayella Ewell is treated by her father after the death of her mother. Bob Ewell thinks that because his wife has died, Mayella should take on the motherly figure, simply because she is a female. One of the most disturbing examples of sexual prejudice I encountered in the novel was the fact that women weren't aloud on the jury service. As I said earlier in this essay, racial prejudice is the most prominent and most of the other kinds of prejudice have a link back to it. Racial prejudice forms the background of the trial. Racial prejudice consumed the mob, which wished to prevent Tom even gaining a court hearing, the most basic form of justice. This is probably the fiercest form of prejudice in the novel. The very town of Maycomb was split by racial prejudice. This is evident because the blacks had a separate church, a separate living area and even separate places in the courtroom, which was further away from the whites area. ...read more.

For instance, the way that Boo Radley was described as a 'malevolent phantom' and always described as an outsider proved to be completely wrong. He turned out in the end of the book to be a nice man who Jem finally understands why he behaved the way he did for all that time. 'Atticus was right. One time he said you never really know a person until you stand in there shoes and walk around in them. Just standing on the Radley porch was enough' The way Harper Lee chooses to tell the story in the eyes of a child is a good way to un ravel the book in a simple and understanding way. Above all Harper Lee uses Atticus as her main spokesmen. The main point this novel tells us is if you can stand in somebody else's shoes and understand them, prejudice ends. My personal opinion of this book is I totally agree with what Atticus keeps reminding us throughout the book. Don't pre-judge until you have stood in someone else's shoes and walked around. By jay lewis 11vb ...read more.