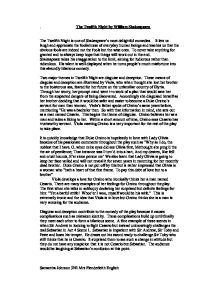 The Twelfth Night by William Shakespeare

. The Twelfth Night by William Shakespeare The Twelfth Night is one of Shakespeare's most delightful comedies. It lets us laugh and appreciate the foolishness of everyday human beings and teaches us that the obvious fools are indeed not the fools but the wise ones. To never take anything for granted and to always keep hope that things will work out in the end. Shakespeare takes his exaggeration to the limit, aiming for ludicrous rather than ridiculous. His talent is well displayed when he turns people's much misfortune into this absurdly hilarious comedy. Two major themes in Twelfth Night are disguise and deception. These means of disguise and deception are illustrated by Viola, who when thought she lost her brother to the boisterous sea, feared for her future on the unfamiliar country of Illyria. Through her worry, her prompt mind went t+o work of a plan that would save her from the suspected dangers of being discovered. Accordingly she disguised herself as her brother deciding that it would be safer and easier to become a Duke Orsino's servant for men than women. Viola's father spoke of Orsino's same years before, mentioning "He was a bachelor then. So with that information in mind, she sets out as a man named Cesario. ...read more.

It surprised them to see such a change in attitude but they do not have any suspicion that it is not Cesario but Sebastian. The audience would be laughing at Sebastian's confusion at this point. Olivia enters the scene just as Sir Toby draws his sword. She immediately rushed to protect Sebastian whom she thinks is Cesario. When the three men have exited the scene, Olivia yet again declares her love for Cesario to Sebastian, who is now even more confused. She asks him if he will "be rul'd by me!" He accepts through all the confusion, seeing she was beautiful and somehow already loved him. Sebastian was not going to tell Olivia the truth that she did not know him because everything was working out well for him and that brings around the theme of deception. Duke Orsino deceived himself by thinking that he was in love with Lady Olivia when in reality he was in love with the idea of being in love. He made himself believe that he had a chance with Lady Olivia and that when she found out how much he loved her then she would love him back. Duke Orsino's love to Lady Olivia was unrequited much like Malvolio. Malvolio was a stewardess of Olivia's household. ...read more.

Orsino deceives himself when he is convinced that he is in love with Olivia. He is in love with love. Malvolio deceives himself when he thinks that he worthy of Olivia's love. He lets himself be made a mockery of this. Malvolio was deceiving Lady Olivia for a while because all the while that he served her, he just wanted to be made important. I enormously enjoyed Act 2 Scene 3 in which Sir Toby, Sir Andrew, Feste and Maria were singing and joking around. The scene lightens up the seriousness of the play and makes you laugh at how unlike nobles Sir Toby and Sir Andrew actually are. This play made me think about how simple love can really be, whether it is love for your siblings or real love to someone. There could be many complications in your circumstances but as long as there is that love then everything can be made simple. The last scene was a particular triumph because everything was closed up, all the complications straightened out and everybody was left happy-except from Malvolio. I have seen the play live and I found it extremely humorous. It was very remarkable to watch and I tremendously enjoyed it. There is a single quote to sum up this play and that is: "Nothing that is so, is so" Samantha Johnson 3N1 Mrs Plenderleith English ...read more.