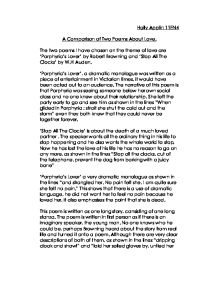 The two poems I have chosen on the theme of love are 'Porphyria's Lover' by Robert Browning and 'Stop All The Clocks' by W.H Auden.

Holly Applin 11EN4 A Comparison of Two Poems About Love. The two poems I have chosen on the theme of love are 'Porphyria's Lover' by Robert Browning and 'Stop All The Clocks' by W.H Auden. 'Porphyria's Lover', a dramatic monologue was written as a piece of entertainment in Victorian times, it would have been acted out to an audience. The narrative of this poem is that Porphyria was seeing someone below her own social class and no one knew about their relationship. She left the party early to go and see him as shown in the lines "When glided in Porphyria ; strait she shut the cold out and the storm" even they both knew that they could never be together forever. 'Stop All The Clocks' is about the death of a much loved partner , The speaker wants all the ordinary thing in his life to stop happening and he also wants the whole world to stop. Now he has lost the love of his life he has no reason to go on any more, as shown in the lines "Stop all the clocks, cut of the telephone, prevent the dog from barking with a juicy bone" 'Porphyria's Lover' a very dramatic monologue as shown in the lines "and strangled her. No pain felt she, I am quite sure she felt no pain." This shows that there is a use of dramatic language, he did not want her to feel no pain because he loved her, it also emphasises the point that she is dead. ...read more.

from pride, and vainer her dissever, and give herself to me forever", and that's why he decided to strangle her, It was the only option left to him, in his mad mind. In 'Stop All the Clocks' the speaker of the poem could be a man or a women, they were grieving about the loss of their loved one, he just wants everything to stop. The speaker of the poem wants everyone to know that his loved one is dead, as shown in the lines "Let aeroplanes circle moaning overhead scribbling on the sky the message he is dead". This line starts with a capital letter to show how important it is to him that his lover is dead. Also the idea of a message being written in the sky by a jets steam is extreme. This shows how deep his love is. The speaker in 'Stop All the Clocks' is being very dramatic about how his life is over as well as his loved one's, shown in the lines "Stop all the clocks, cut of the telephone, prevent the dog from barking with a juicy bone" this show that he wants all the ordinary things in his life to stop, he even wants time to stop and he also wished that he could put the clock back. 'Porphyria's Lover' was written about 100 years before 'Stop All The Clocks'. I can tell this because of the use of the language that has been used in both of the poems. ...read more.

the speaker do explain a lot and they tend to give you an impression of what has happened and what they have lost, it also tells you what it can feel like to loose someone close to you. Although if the reader has lost someone then they can relate to the poem and the feelings that have been described in the poem much more. The use of repetition adds impact on the thoughts of the reader, as shown in the lines "my noon, my midnight, my talk, my song". When repetition is used it forces the message across to the reader, in this case the message was that the heart broken lover who lost there loved one is saying that his lover was only his and no one else's, also no one else would understand his feelings because o one would understand why he was hurting so much. The final reason why I preferred this poem to 'Porphyria's Lover' is because the heart broken man just wanted everything in the world to stop as shown in the lines "pack up the moon and dismantle the sun" and I can understand that and it made me feel sympathy for him. The reason why he wanted everything to stop was that he had no reason to carry on in life. He has lost the person who was the centre of his world and he is now lost because he is by himself. This poem is a very expressive poem and it explains his feelings and what he is going through. ...read more.