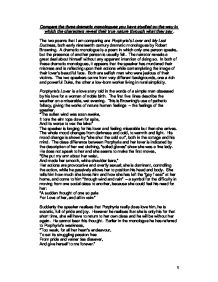 The two poems that I am comparing are Porphyria's Lover and My Last Duchess, both early nineteenth century dramatic monologues by Robert Browning.

Compare the three dramatic monologues you have studied on the way in which the characters reveal their true nature through what they say. The two poems that I am comparing are Porphyria's Lover and My Last Duchess, both early nineteenth century dramatic monologues by Robert Browning. A dramatic monologue is a poem in which only one person speaks, but the presence of another person is usually felt. The narrator reveals a great deal about himself without any apparent intention of doing so. In both of these dramatic monologues, it appears that the speaker has murdered their mistress and is reflecting upon their actions while contemplating the image of their lover's beautiful face. Both are selfish men who were jealous of their victims. The two speakers came from very different backgrounds, one a rich and powerful Duke, the other a low-born worker living in rural simplicity. Porphyria's Lover is a love story told in the words of a simple man obsessed by his love for a woman of noble birth. The first five lines describe the weather on a miserable, wet evening. This is Browning's use of pathetic fallacy, giving the works of nature human feelings - the feelings of the speaker. "The sullen wind was soon awake, It tore the elm tops down for spite, And its worse to vex the lake:" The speaker is longing for his lover and feeling miserable but then she arrives. The whole mood changes from darkness and cold, to warmth and light. ...read more.

The reader can assume that the lady is dead, "Looking as if she were alive" Like the murdered lover in the previous poem. The Duke begins describing the painting and the portrait sessions with the famous artist, there does not seem to be much regret for the loss of his wife. He keeps her portrait behind a curtain. "since no one puts by The curtain I have drawn for you but I" In this way he can control who looks at her and can appreciate her beauty. The Duke is slowing that his jealousy of his wife's admirers and his possessiveness, like that shown by Porphyria's Lover. The visitor has commented on the lovely expression on the Duchesses face. The speaker then remarks that it was not just "her husband's presence" that caused his wife's joyous blush. She was pleased by the complements paid to her by the painter. The Duke then proceeds to recount a list of his complaints about the former Duchess. "She had A heart - how shall I say? Too soon made glad, Too easily impressed; she liked what'er She looked on and her looks went everywhere" He criticises her, for the lovely smile she gave everyone, her politeness to others and for the pleasures she felt in all the kindnesses shown to her. She was happy with everything, sunsets, a branch of cherry blossoms and her "white mule". We have an indication of his irritation, "Sir, twas all one! ...read more.

In My Last Duchess, the Duke is selfish because he wants his Duchess to give all her smiles and affection to him, and value him more than anything else. The speaker in Porphyria's Lover does not show his love for Porphyria until the end of the monologue, after he had murdered her, when he seemed to become very passionate. In contrast, in My Last Duchess, the Duke does not seem to show any passion for the Duchess at all. If he shows any passion at all, it is for his art collection, which makes me think that was how he saw the young Duchess, a work of art, something that he owned and could show off, and something that he could also discard when it no longer pleased him. The speaker in Porphyria's Lover, reveals himself to be someone who speaks his heart and does not 'fence around' the truth like the Duke. Although the Duke says he does not have skilled speech, its is obvious that his diction is carefully chosen through out. He is almost inviting the listener to disagree with him. "Even had you the skill In speech - (which I have not)" The speaker in Porphyria's Lover uses a much simpler diction, as he will not have been as well educated as the Duke. Both men are murderers, one because of love, which he feels, could never be accepted because of the social divide, the other as a result of jealousy, arrogance and spite, again occasioned by the difference in class. ?? ?? ?? ?? 1 ...read more.