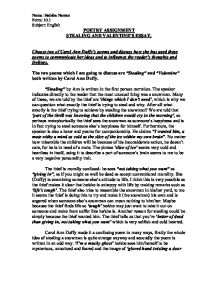 The two poems which I am going to discuss are &quot;Stealing&quot; and &quot;Valentine&quot; both written by Carol Ann Duffy.

POETRY ASSIGNMENT STEALING AND VALENTINE'S ESSAY. Choose two of Carol Ann Duffy's poems and discuss how she has used these poems to communicate her ideas and to influence the reader's thoughts and feelings. The two poems which I am going to discuss are "Stealing" and "Valentine" both written by Carol Ann Duffy. "Stealing" by Ann is written in the first person narration. The speaker indicates directly to the reader that the most unusual thing was a snowman. Many of these, we are told by the thief are 'things which I don't need', which is why we can question what exactly the thief is trying to steal and why. After all what exactly is the thief trying to achieve by stealing the snowman? We are told that 'part of the thrill was knowing that the children would cry in the morning', so perhaps metaphorically the thief sees the snowman as someone's happiness and is in fact trying to steal someone else's happiness for himself. Furthermore, the speaker is also a loner and yearns for companionship. He claims "I wanted him, a mate withy a mind as cold as the slice of the ice within my own brain". ...read more.

This poem is basically an informal and casual speech, in which the speaker communicates directly with the reader. As revealed from the last sentence. "You don't understand what I'm saying, do you?" the speaker is addressing to the reader and requesting them to respond and be involved. This next poem is very different because the poem influences about love and feelings which is different because "Stealing" is psychological in a way which describes thoughts and it makes us wonder why he chooses to do such a crime. The second poem that I am going to discuss is "Valentine". In "Valentine", Duffy uses the onion to give an original and, in some ways, a shocking view of love: "Not a red rose or a satin heart"- she ignores the clich�s and opts for something more dramastic and powerful. This is the first line of the poem, and it automatically gives a negative impression, as the first remark in the poem is negative-'not'. Also, the title of the poem is very misleading. One would expect to read of romantic love, instead she writes about cynical love, suggesting that she may have been hurt in previous relationships. We learn that the poet has chosen to give her lover an onion as a valentine's gift. ...read more.

In my view Carol Ann Duffy seems to have a better understanding of love. The use of metaphors play's an important role in both poems as does use of poetic imagery. In my view Carol Ann Duffy seems to have a better understanding of love. But in "Stealing" it is very outstanding. I think that it is challenging poem which you have to think about to understand. There are many questions about the thief's identity which you can only guess. The end question is quite an odd way to end a poem and it is not the sort of ending that I expected. It leaves you wondering who the thief is questioning. I was slightly disappointed by the vague ending; I was expecting some sort of consequence to the thief's actions. It's a very clear poem about the way a thief thinks and why they steal. 'the slice of ice in the brain' seems very psychological and is a clever way to describe the coldness or selfishness in someone's mind. I therefore think hat Carol Ann Duffy's idea of a thief is quite accurate and realistic and the reason we don't fully understand the poem is because we'll never fully understand why thieves steal. ?? ?? ?? ?? Name: Habiba Nawaz Form: 10.1 Subject: English ...read more.