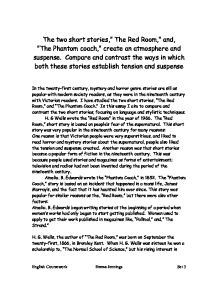 The two short stories,&amp;#148; The Red Room,&amp;#148; and,&amp;#148;The Phantom coach,&amp;#148; create an atmosphere and suspense. Compare and contrast the ways in which both these stories establish tension and suspense

The two short stories," The Red Room," and, "The Phantom coach," create an atmosphere and suspense. Compare and contrast the ways in which both these stories establish tension and suspense In the twenty-first century, mystery and horror genre stories are sill as popular with modern society readers, as they were in the nineteenth century with Victorian readers. I have studied the two short stories, "The Red Room," and "The Phantom Coach." In this essay I aim to compare and contrast the two short stories, focusing on language and stylistic techniques. H. G Wells wrote the "Red Room" in the year of 1986. The "Red Room," short story is based on people's fear of the supernatural. This short story was very popular in the nineteenth century for many reasons: One reason is that Victorian people were very superstitious, and liked to read horror and mystery stories about the supernatural, people also liked the tension and suspense created. Another reason was that short stories became a popular form of fiction in the nineteenth century. This was because people used stories and magazines as forms of entertainment; television and radios had not been invented during the period of the nineteenth century. Amelia. B. Edwards wrote the "Phantom Coach," in 1852. The "Phantom Coach," story is based on an incident that happened in a mans life, James Murray's, and the fact that it has haunted him ever since. This story was popular for similar reasons as the, "Red Room," but there were also other factors: Amelia. B. Edwards began writing stories at the beginning of a period when women's works had only began to start getting published. Women used to apply to get their work published in magazines like, "Pallmal," and," The Strand." ...read more.

All of the above create excellent tension and suspense in both short stories. In both stories the author's use one main protagonist. This is important because short stories have to involve the reader into the plot immediately; if lots of characters were used, the story would last too long, and the readers' interest is lost, so one main character makes more sense. The authors write descriptive characterisation passages to create tension and suspense. This is very important because it also helps the reader to empathise with the character who is in tense situations. The main character in the "Red Room," is the narrator, his name is undiscovered throughout the story, but he is a strong character and pretends not to fear the ghosts, but when he enters the room his fear overtakes him. This makes the reader feel tense because a strong, fearless character becomes scared of the supernatural this makes the room seem more ominous than it actually is. Also his overconfidence and self-assured manners worries the reader. James Murray is the main character of "The Phantom Coach," he is well educated, his job being a barrister, confident and also impatient. James Murray creates tension throughout the story, but one of his most tense situations is at the beginning, when he is telling the reader that he is going to tell them about an incident that happened twenty years ago, and that he has only told one other person. This makes the reader wonder why only one other person knows- what could be so bad? There are two subsidiary characters in each of the two short stories. In the "Red Room," there is the man with the withered arm, and the old woman. ...read more.

The "Phantom Coach" conclusion is more resolved, but has an aspect of mystery lingering. The story ends with James Murray waking up after an accident, this is similar to the "Red Room". James Murray concludes in the final paragraph that he has not told his wife about the incident, and that he never intends to do so. This creates mystery because the reader is left suspicious as to why James will not tell his wife. The two short stories have similar endings, because both main protagonists are waking up from accidents. The accidents both could have involved the supernatural. The main difference between the two endings is that, in the "Phantom Coach" the reader is told the ending, and is therefore left with very few suspicions. On the other hand, the "Red Room" concludes leaving the reader with many suspicions, as to what the fear is. Personally I found that the "Red Room" conclusion was the most effective. This was because as a reader, I did not expect the room to be haunted by fear, I thought that it was the supernatural. Also I liked the fact that the reader to some extent could actually decide for himself or herself what the fear was. Throughout the two short stories, both authors have successfully managed to create tension and suspense, through using many writing techniques, such as, language, description and plot. I enjoyed both stories, mainly because they are both typical murder-mystery stories, and they both have created enough tension and suspense to keep the reader hooked. The "Red Room" and the "Phantom Coach," are successful horror genre stories that have kept readers from the nineteenth century, through to modern day readers in tension and suspense, and I am sure that they will still will for many years to come. ?? ?? ?? ?? English Coursework Emma Jennings Set 3 ...read more.