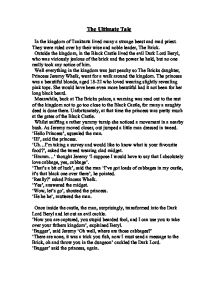 The Ultimate Tale In the kingdom of Tanktarta lived many a strange beast and mad priest. They were ruled over by their wise and noble leader, The Brick. Outside the kingdom, in the Black Castle lived the evil Dark Lord Beryl, who was viciously jealous of the brick and the power he held, but no one really took any notice of him. Well everything in the kingdom was just peachy so The Bricks daughter, Princess Jeremy Whelk, went for a walk around the kingdom. The princess was a beautiful blonde, aged 18-22 who loved wearing slightly revealing pink tops. She would have been even more beautiful had it not been for her long black beard. Meanwhile, back at The Bricks palace, a warning was read out to the rest of the kingdom not to go too close to the Black Castle, for many a naughty deed is done there. Unfortunately, at that time the princess was pretty much at the gates of the Black Castle. Whilst sniffing a rather yummy turnip she noticed a movement in a nearby bush. As Jeremy moved closer, out jumped a little man dressed in tweed. 'Hello Princess', squealed the man. ...read more.

To the castle. Hurry. Hmmm', and with that the man shuffled away into the forest. After a little practice Durex was flying well and was now well on his way to the Black Castle to meet his destinyyyyyy......... At the castle Durex thought of a way to get inside and rescue the princess. He didn't even try the front door as they are always locked and guarded, he went round the back to the broken, unlocked screened door that most evil castles have. He made his way quickly through the darkness, following only his instincts and the neon signs giving directions to the secret den and dungeon. Durex saw the Dark Lord pacing up and down his dank den, in front of the princess who was tied and gagged in the corner. Durex somersaulted into the room, rolled across the floor, sprang up, whirled his poking stick above his head and landed in a very heroic fighting stance known as the smelly fish. 'Oh it's you', said Beryl, with a yawn 'Yes, tis I', said Durex, disappointed by the lack of reaction to his dramatic entrance. Beryl pulled out his deadly courgette and made for the hero, wailing an ancient battle cry. ...read more.

The slug munched the leaves and followed the trail to the statue. 2 days later he arrived, after Durex had tried to chew his own leg off in hunger. As the slug finished the last leaf Durex jumped out and trod on the notorious slug. 'You have accomplished the task', said Dmitri, appearing from no where, 'Woohoohoo for you-hoo', he sang as he removed an elephant from his large tash and ate it. A great party was held in honour of Mighty Durex and the success of his quest. Huge tables were laid with food, Queen's songs sang, people danced, and there was much rejoicing. Brian, who had survived the attack, was revealed as the cheating scum that he was and often accused of supporting the scum (Ar...Ars...., Can't say it) He was given a Michael Jackson make over and banished to France. Afterwards there was a beautiful wedding ceremony between Mighty Durex and Princess Jeremy Whelk. Beautiful, even though the apparently mad priest randomly yelled out words in mid speech poo for example, or willy. Durex became the new king with Jeremy as his faithful queen, and, as he sat with her looking out at the sunset he thought.......hang on a minute..........I'm gay! THE END? Hopefully! ...read more.