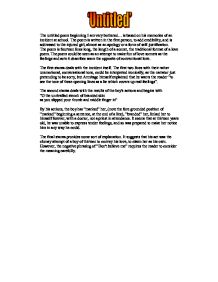 The untitled poem beginning I am very bothered... is based on his memories of an incident at school.

The untitled poem beginning I am very bothered... is based on his memories of an incident at school. The poem is written in the first person, to add credibility, and is addressed to the injured girl, almost as an apology or a form of self-justification. The poem is fourteen lines long, the length of a sonnet, the traditional format of a love poem. ...read more.

The first two lines with their rather unemotional, conversational tone, could be interpreted ironically, as the narrator just pretending to be sorry, but Armitage himself explained that he wants the reader "to see the tone of these opening lines as a lie which covers up real feelings". The second stanza deals with the results of the boy's actions and begins with "O the unrivalled stench of branded skin ...read more.

It seems that at thirteen years old, he was unable to express tender feelings, and so was prepared to make her notice him in any way he could. The final stanza provides some sort of explanation. It suggests that his act was the clumsy attempt of a boy of thirteen to convey his love, to claim her as his own. However, the negative phrasing of "Don't believe me" requires the reader to consider the meaning carefully. ...read more.