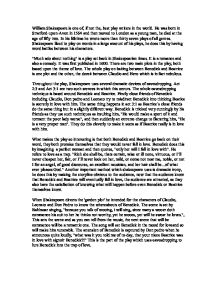 The use of eavesdropping in Shakespeares

William Shakespeare is one of, if not the, best play writers in the world. He was born in Stratford-upon-Avon in 1564 and then moved to London as a young man, he died at the age of fifty two. In his lifetime he wrote more than thirty seven plays of all genres. Shakespeare liked to play on words in a large amount of his plays, he does this by having word battles between his characters. "Much ado about nothing" is a play set back in Shakespearian times. It is a romance and also a comedy. It was first published in 1600. There are two main plots in the play, both based upon the theme of love. The whole play on baiting between Benedick and Beatrice is one plot and the other, the deceit between Claudio and Hero which is in fact nebulous. Throughout the play, Shakespeare uses several dramatic devices of eavesdropping. Act 2:3 and Act 3:1 are two such scences in which this occurs. The whole eavesdropping technique is based around Benedick and Beatrice. ...read more.

The scene is set by Balthasar singing, "because you talk of wooing, i will sing, since many a wooer doth commence his suit to her he thinks not worthy, yet he wooes, yet will he swear he loves.", This sets the scene and as you can tell from the music, the next scene that will be commence will be a romantic one. The song will set Benedick in the mood for loveand so will make him vunerable. The attension of Benedick is captured by Don pedro when he announces quite loudly, "what was it you told me of to-day, that your niece Beatrice was in love with signoir Benedick?!" This is the part of the play which uses eavesdropping to lure Benedick into the trap of love. Soon after act 2:3, in act 3:1 a similar scene occurs, this time the whole trickery scenario is used again but this time around Beatrice. Margaret was sent as a messenger to tell Beatrice of news which will make her interested and convince her to go down to the location of Hero and Ursula. ...read more.

Women were undoubtedly ruled upon in the relation between male and female. Women had to have purity and virtue, also for respected men to marry a women they usually had to have dowry. Beatrice is an unusual character in this repect as she did not have a dowry but was respected greatly by both male and female. Although eavesdropping is mostly used in the two acts, Act 2:3 and Act 3:1, there are other circumstances throughout that also use the form of eavesdropping. When Claudio is decieved by Don John 'The Bastard'. He is tricked when Don John tells him that his wife to be is having an affair with another man. A plot is set up and Claudio unknowing of the deceitfulness of Don John is led to a courtyard, above the courtyard is a room which a shadow is performed acting as Hero, which tricks Claudio into believing she is cheating on him. Also another event in which eavesdropping is used effectively is when 'The Watch' are secretley listening in on a conversation between the man who acted in the set up of Hero`s so called affair, boasting on his triumph. ...read more.