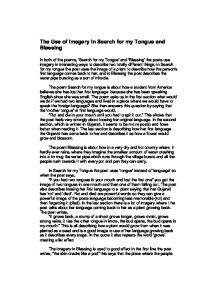 The Use of Imagery in Search for my Tongue and Blessing

The Use of Imagery in Search for my Tongue and Blessing In both of the poems, 'Search for my Tongue' and 'Blessing' the poets use imagery in interesting ways to describe two totally different things; in Search for my tongue the poet uses the image of a plant to describe how the person's first language comes back to her, and in Blessing the poet describes the water pipe bursting as a sort of miracle. The poem Search for my tongue is about how a student from America believes she has lost her first language because she has been speaking English since she was small. The poem asks us in the first section what would we do if we had two languages and lived in a place where we would have to speak the foreign language? She then answers this question by saying that the 'mother tongue' or first language would, "Rot and die in your mouth until you had to spit it out." ...read more.

This is all describing how a plant would grow from when it was planted as a seed and is a good image to use of her language growing back as it describes every stage. In the quote it also repeats the word 'grows' creating a list effect The imagery in Blessing is used to good effect in the first line the poet writes, "the skin cracks like a pod" this says that the place where the people live in very hot and dry, it is also a painful image and is unpleasant as when pods break they usually just explode and the seeds inside them fly out. The water is also described as silver, which says that the people believe it is very precious. In the poem different words are used which include; blessing, kindly god and congregation, these words are usually used when describing a religious ceremony, this can be interpreted to say that the people believe that when water comes to their village in any form, it is a miracle or a present from their god. ...read more.

The effect on the reader in Search for my Tongue is that in the first section we are asked what we would do if we had two languages and were loosing the first, but as very few of us know what we would do because it would never happen it has the effect that we feel sorry for her. In the last section she has gained back her language and is describing what it feels like to her, this has the effect that we feel happy for her. In blessing the tone of every stanza changes so it has different effects on the reader. In the first stanza the tone is very unpleasant, because of the line, "the skin cracks like a pod". In the second stanza we feel that the poet is desperate to get some water however small amount. The third stanza is one of joyfulness because the pipe has burst. The poet has created this mood by saying that everyone in the village ruches to the break with a "roar of tongues" and the poet also calls the pipe burst a blessing. The last stanza has a tone of joyfulness aswell. ...read more.