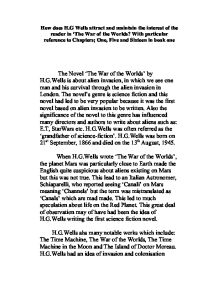 The War of the Worlds

How does H.G Wells attract and maintain the interest of the reader in 'The War of the Worlds? With particular reference to Chapters; One, Five and Sixteen in book one The Novel 'The War of the Worlds' by H.G.Wells is about alien invasion, in which we see one man and his survival through the alien invasion in London. The novel's genre is science fiction and this novel had led to be very popular because it was the first novel based on alien invasion to be written. Also the significance of the novel to this genre has influenced many directors and authors to write about aliens such as: E.T, StarWars etc. H.G.Wells was often referred as the 'grandfather of science-fiction'. H.G.Wells was born on 21st September, 1866 and died on the 13th August, 1945. When H.G.Wells wrote 'The War of the Worlds', the planet Mars was particularly close to Earth made the English quite suspicious about aliens existing on Mars but this was not true. This lead to an Italian Astronomer, Schiaparelli, who reported seeing 'Canali' on Mars meaning 'Channels' but the term was mistranslated as 'Canals' which are mad made. ...read more.

Another technique used to attract the readers attention is the use of pronouns, 'must be to them at least as alien and lowly as are the monkeys and lemurs to them'. The use of pronouns makes this sentence seem mysterious and unknown. This is because, the narrator is referring to how us humans, look to the aliens, just like how we think of creatures on Earth. There are many references in Chapter One, to the invasion such as 'The storm burst upon us six years ago now', 'terrestrial men fancied there might be other men upon Mars', 'The Martians seem to have calculated their descent with amazing subtlety'. These references tell us about how the aliens are getting ready to invade if there is something or someone on Planet Red. This type of language technique attracts the readers attention more as rumours saying that aliens are on Mars, builds up tension and suspense, as the reader starts thinking if there really is life on Mars then when will they invade and how will they cope. This attracts the reader's attention even more because it gets the reader thinking of what's going to happen next and keeps on guessing about how it will affect the people in London. ...read more.

H.G.Wells has used imagery to show the reader what the attack was like. For example, alliteration has been used to describe the scene, 'There were shrieks and shouts', 'Then came a cry from a common'. Onomatopoeia has also been used as imagery as these are words which 'sound', this can help the reader imagine how the intensity of the locals struggle to survive and get away from the Martians. H.G.Wells has used a lot of describing words to describe people's actions, appearances and behaviour to the invasion. 'Skins were dry, their lips black and cracked', 'dainty clothes', 'weary faces smeared with tears', 'thirsty weary, and footsore', 'miserable eyes', 'rushed towards the corner', ' hurried past', 'pulled', 'wretched himself free'.H.G.Wells has used emotions by telling us people's movement which was similar to their feelings and position in which they were in. The description of people has helped the reader maintain their interest because it helps the reader to get a clearer picture of how the tension in the scene is and what the characters are feeling and experiencing. This links to colonialism because when the English had taken over some parts of South Africa and most of its people, the people had feared a lot and now it's the English who are killed, shot, left homeless, scared and trying to survive. ...read more.