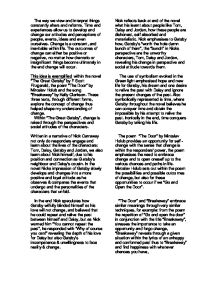 The way we view and interpret things constantly alters and reforms. Time and experiences allow us to develop and change our attitudes and perceptions of people, events, ideas and even ourselves.

The way we view and interpret things constantly alters and reforms. Time and experiences allow us to develop and change our attitudes and perceptions of people, events, ideas and even ourselves. Change is a constant, and inevitable within life. The outcomes of change can either be positive or negative, no matter how dramatic or insignificant things become ultimately in the end change will occur. This idea is exemplified within the novel "The Great Gatsby" by F Scott Fitzgerald, the poem "The Door" by Miroslav Holub and the song "Breakaway" by Kelly Clarkson. These three texts, through different forms, explore the concept of change thus helped shape my understanding of change. Within "The Great Gatsby", change is raised through the perspectives and social attitudes of the characters. Written in a narrative of Nick Carraway not only do responders engage and learn about the lives of the characters: Tom, Daisy, Gatsby and Jordan, we also learn about Nick himself, due to his position and connection as Gatsby's neighbour and Daisy's cousin. ...read more.

The use of symbolism evoked in the Green light emphasised hope and new life for Gatsby, his dream and one desire to relive the past with Daisy and ignore the present changes of the past. Also symbolically represented is time, where Gatsby throughout the novel believes he can conquer time and obtain the impossible by his attempt to relive the past. Ironically in the end, time conquers Gatsby by taking his life. The poem "The Door" by Miroslav Holub provides an opportunity for self-change with the sense that change is within the responders' power, the poem emphasises the need to embrace change and to open oneself up to the various chances and paths in life. Miroslav Holub sets out within the poem the possibilities and possible outcomes of change, but also for these opportunities to occur if we "Go and Open the Door". "The Door" and "Breakaway" embrace similar meanings through very similar techniques, for example: from the poem the repetition of "Go and open the door" ...read more.

As a result, there are infinite opportunities and choices in life that lead to change, and life-altering experiences that can occur with the luring tone of both texts, optimises a positive outcome. Change is the future; the attempt to force things to remain the same will ultimately still have change. The 3 texts have enhanced my understanding of change in the sense that it revolves around the past, present and future, where the past is irreparable, but presently are the numerous choices and chances that can be taken to allow a different future, a better or worse future, a change from the past. Change has its definite risks and flaws, but essentially all 3 texts indicate that change cannot be avoided, In conclusion the text that most effectively dealt with the concept of Change, is the novel "The Great Gatsby", as it evidently displayed how and what change occurred. And with the events that occurred in the novel it provided a better understanding than the other two texts, which set out to persuade one to change as opposed to the numerous obvious changes in the novel. ...read more.