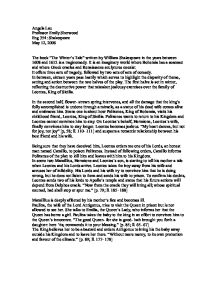 Angela Lau Professor Emily Sherwood Eng 354: Shakespeare May 12, 2006 The book "The Winter's Tale" written by William Shakespeare in the years between 1608 and 1612 is a tragicomedy. It is an imaginary world where Bohemia has a seacoast and where Greek oracles and Renaissance sculptures coexist. It offers three acts of tragedy, followed by two acts of acts of comedy. In between, sixteen years pass hastily which serves to highlight the disparity of theme, setting and action between the two halves of the play. The first halve is set in winter, reflecting the destructive power that mistaken jealousy exercises over the family of Leontes, King of Sicilia. In the second half, flower- strewn spring intervenes, and all the damage that the king's folly accomplished is undone through a miracle, as a statue of his dead wife comes alive and embraces him. Scene one is about how Polixenes, King of Bohemia, visits his childhood friend, Leontes, King of Sicilia. Polixenes wants to return to his Kingdom and Leontes cannot convince him to stay. On Leontes�s behalf, Hermione, Leontes�s wife, finally convinces him to stay longer. Leontes becomes jealous. "My heart dances, but not for joy, not joy" [p, 58; ll. 110- 111] and suspects a romantic relationship between his best friend and his wife. Being sure that they have deceived him, Leontes orders me one of his Lords, an honest man named Camillo, to poison Polixenes. Instead of following orders, Camillo informs Polixenes of the plan to kill him and leaves with him to his Kingdom. In scene two Mamillius, Hermione and Leontes�s son, is starting to tell his mother a tale when Leontes and his Lords arrive. Leontes takes the boy away from his wife and accuses her of infidelity. His Lords and his wife try to convince him that he is doing wrong, but he does not listen to them and sends his wife to prison. ...read more.

A happy ending is possible because so many characters are ultimately loyal to Leontes and work hardly to restore to him what he himself has destroyed. The king believes that he is being punished by Apollo because the awaited word of the oracle is brushed aside. The death of Mamillius, his son, convinces Leontes that he has been wrong. He comes around because he interprets the death of his son as a punishment from the gods. In the third scene of the third act the comic death of Antigonus transforms the tragedy to a comedy and romance. From this time on the play will move towards repairing the mistakes that Leontes made. In act four the jealousy and tyrannical behaviour of Leontes is left behind. The play sets no longer in Sicilia and enters the countryside of Bohemia. There the love story of Perdita and Florizel starts in an idyllic landscape with shepherds and rogues. When Florizel sees Perdita the first time, he believes that she is a goddess of nature. IN the fourth act the theme of birth and rebirth is very important. Leontes has caused the death of his wife, his son and the apparent death of Perdita, his daughter. Perdita has miraculously survived, and her restoration to her father will seem, to the grieving of the court of Sicilia. Also in Act four the danger of tyranny is presented, but not Leontes is the one who makes fault, it is the anger of Polixenes, which is very excessive. Polixenes threatens Perdita with physical violence. These act shows that he is a man who is protected by his throne and who misuses his power as Leontes did, too. In the final Act the story plays again in Sicilia, Hermione and Perdita return to the king miraculously. Polixenes, who wants his son to marry, allows him to marry Perdita, because she is a princess and the daughter of his old childhood friend. ...read more.

When Lachlan first arrives in Australia from Scotland he tries to refuse entry into this new world, for "fear of losing, more than he had done already, the one he had left and was heartsick for" (D. Malouf pg 55). Gemmy too was heartsick. This is what made him run to the children after isolation for sixteen years. Lachlan uses Gemmy to display power. Unlike Janet, Lachlan relies on people seeing him. Lachlan leads him with an "invisible leash" (D. Malouf pg 35), further degrading Gemmy as a man. Afterwards, when Gemmy goes to live with Mrs Hutchence, Lachlan realises his mistakes, and feels remorse and regret. His honour and connection forced him to "stand up for Gemmy whatever the cost" (D. Malouf pg 157). Torn between his responsibility for Gemmy and his friends, Lachlan drifts apart from both. He begins to discover other worlds where he is not the centre of attention: he notes a change in Janet, where she is "in a world of her own that he has no part in" (D. Malouf pg 164). His powers of intuition and social standing have limitations, and so he loses his ability to communicate properly with Gemmy in the care free way that Janet does. Despite this, For years afterwards, he would have dreams...and went right up to where he was standing, and looked into his [Gemmy's] face. But it remained blurred...and he woke with his cheeks wet, even after so long, though he was no longer a child (D. Malouf pg 165). There was a bond between the two, however it was brought on initially by a physical display of power, and so did not produce the same connection as there was with Janet. The cultural rift between Janet, Lachlan and Gemmy did not stop friendship from taking place. Most of those who choose to make an issue over Gemmy's race are in fact those alienated from society, and so see Gemmy as a scapegoat. When people fail to form a connection with Gemmy, it is because they allow prejudice to seep into their emotions, thus limiting their intuition and understanding ...read more.