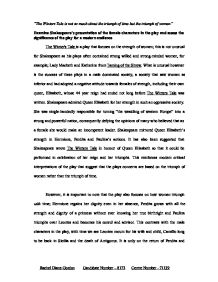 &quot;The Winters Tale is not so much about the triumph of time but the triumph of women&quot; Examine Shakespeare's presentation of the female characters in the play and assess the significance of the play for a modern audience

"The Winters Tale is not so much about the triumph of time but the triumph of women" Examine Shakespeare's presentation of the female characters in the play and assess the significance of the play for a modern audience The Winter's Tale is a play that focuses on the strength of women; this is not unusual for Shakespeare as his plays often contained strong willed and strong-minded women, for example; Lady Macbeth and Katherine from Taming of the Shrew. What is unusual however is the success of these plays in a male dominated society, a society that saw women as inferior and had adopted a negative attitude towards females of strength, including their own queen, Elizabeth, whose 44 year reign had ended not long before The Winters Tale was written. Shakespeare admired Queen Elizabeth for her strength in such an oppressive society. She was single-handedly responsible for turning "the weakling of western Europe" into a strong and powerful nation, consequently defying the opinions of many who believed that as a female she would make an incompetent leader. Shakespeare mirrored Queen Elizabeth's strength in Hermione, Perdita and Paulina's actions. It has also been suggested that Shakespeare wrote The Winters Tale in honour of Queen Elizabeth so that it could be performed in celebration of her reign and her triumphs. This reinforces modern critical interpretations of the play that suggest that the plays concerns are based on the triumph of women rather than the triumph of time. ...read more.

"I do refer me to the Oracle: / Apollo be my judge!" (Act III Scene II - Line 115 - 116 / Hermione) Shakespeare uses this to highlight weakness within males where there is female strength as he has done throughout the play. Hermione triumphs over Leontes again at the end of the trial scene, when Leontes has emerged from his jealous rage. Here, Hermione is now absent from Leontes life and assumed dead, she triumphs over him by causing him to recognise his faults, trust the consul of women (namely Paulina) and she provokes sixteen years of grief for both her and their children. It is likely that Shakespeare employed this technique to emphasise Leontes dependence on the females in the play, given that, in Hermione and Perdita's absence it seems that all is lost for Leontes. Hermione's final and perhaps her greatest triumph is her forgiveness of Leontes; he wrongly accused her of adultery in public, denied her rest after giving birth, caused the death of their son and sent away their new born child. Yet she was still able to forgive him, this shows her ability to show compassion and love, something Leontes was previously incapable of. Shakespeare uses Hermione's compassion to highlight the weakness of men through the strength of the women. The next character we are introduced to is Paulina, the strongest and the most dominant of the three females, physically, psychologically and intellectually. ...read more.

Shakespeare connects all three women through their compassion and ability to forgive, it is likely that Shakespeare used this technique to contrast the ability of females to triumph over men using love and compassion rather than the forceful, abusive and suppressive techniques employed by men of the 17th Century to gain control over women. Perdita is the final female character we meet, across the 16-year time gap. Perdita's greatest triumph is her ability to become the princess she was born to be without ever having known her true birthright. Shakespeare uses Perdita to explore and reverse the idea that attributes of strength came from the father and elements of weakness from the mother. Perdita is described from the very beginning of the play as strong, much like her mother By doing this Shakespeare attributes strength to women and not to the physically strong males as would have been assumed by contemporaries. "A goodly babe, / Lusty, and like to live:" (Act II Scene II - Line 27 -28 / Emilia) Perdita's strength lies in her innocence, as Hermione's did throughout the trial scene. In Mamillus, we recognise the weakness of his father, in that his death was caused by Leontes failure to recognise Hermione's innocence. Throughout the play Perdita is described very like her mother Hermione, suggesting that Perdita has received the attributes of strength from her mother and not her father who has been seen as a weaker character throughout the play. In the same sense, Perdita benefits from time because she grows to become like her mother, despite her mothers absence. ...read more.