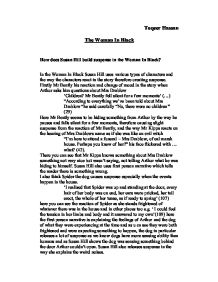 Toqeer Hassan The Woman In Black How does Susan Hill build suspense in the Woman In Black? In the Woman In Black Susan Hill uses various types of characters and the way the characters react in the story therefore creating suspense. Firstly Mr Bently his reaction and change of mood in the story when Arthur asks him questions about Mrs Drablow 'Children? Mr Bently fell silent for a few moments' (...) "According to everything we've been told about Mrs Drablow "he said carefully "No, there were no children" (29) Here Mr Bently seems to be hiding something from Arthur by the way he pauses and falls silent for a few moments, therefore causing slight suspense from the reaction of Mr Bently, and the way Mr Kipps reacts on the hearing of Mrs Drablows name as if she was like an evil witch "I'm here to attend a funeral - Mrs Drablow, of eal marsh house. Perhaps you knew of her?" his face flickered with ... what? (42). There you can see that Mr Kipps knows something about Mrs Drablow something not very nice but wasn't saying, not telling Arthur what he was hiding to himself. ...read more.

He was silent for a moment, glancing at me closely again, trying to discover wither there was any meaning behind the apparent straight forwardness of the question'. There again you can see Susan Hill giving of suspense in her characters, every time the name of Mrs Drablow is mentioned to anyone of Crythin Grifford and the way he tries to hide the truth form Arthur. Susan Hill uses a lot of suspense in the way she explains the weather Arthur experiences in the area of Eel Marsh House. 'I felt confused, teased by it, as though it was made up of millions of live fingers that crept over me. (73 There Arthur is explaining the weather he experienced outside Eel Marsh House the first person narrative is saying, as if the weather was the ghost creeping onto Arthur, the first person causes slight suspense and tension and when Arthur says to himself 'I had fallen under some kind of spell' (92) the house seems to bring Arthur towards itself and every time the fog has appeared in the story suspense and tension is caused. ...read more.

But no one had been there the room had been empty. Here you can see Arthur was seeing ghostly things, things moving but no one there creating great suspense and tension and fear for Arthur and again when the woman appears at the window. 'The sight of the Woman In Black at the nursery window'. (133) Here The Woman In Black appears from nowhere giving Arthur a scare; it also gives of suspense because of her appearance. And near the end of the book the words 'pony and trap' (158) appear in this part you clearly no something is going to happen and you can work out something is going to happen to Arthur and something does happen to his wife and kid something really brutal. They both have a brutal accident while they were on the pony and trap and they both die. Susan Hill finishes her book in suspense because in most ghost stories the ghost near the end disappears or becomes free and everything becomes normal but in Susan Hills story you don't know if the ghost disappears or snot or if it carries on haunting the people of Crythin Grifford, this finishes the book of on a high taste of suspense even with its brutal ending. ...read more.