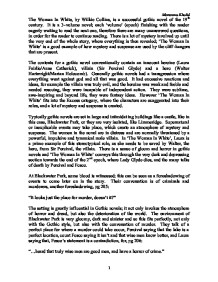 The Woman In White, by Wilkie Collins, is a successfulgothic novel of the 19th century. It is a 3-volume novel; each'volume' (epoch) finishing with the reader eagerly waiting to read the nextone, therefore there are many unanswered questions, in or...

The Woman In White, by Wilkie Collins, is a successful gothic novel of the 19th century. It is a 3-volume novel; each 'volume' (epoch) finishing with the reader eagerly waiting to read the next one, therefore there are many unanswered questions, in order for the reader to continue reading. There is a lot of mystery involved up until the very end of the whole story, where everything is then revealed; 'The Woman In White' is a good example of how mystery and suspense are used by the cliff-hangers that are present. The contents for a gothic novel conventionally contain an innocent heroine (Laura Fairlie/Anne Catherick), villain (Sir Percival Glyde) and a hero (Walter Hartwright/Marian Holocomb). Generally gothic novels had a transgression where everything went against god and all that was good. It had excessive reactions and ideas, for example the villain was truly evil, and the heroine was weak and feeble and needed rescuing, they were incapable of independent action. They were sublime, awe-inspiring and beyond life, they were fantasy ideas. However 'The Woman In White' fits into the Excess category, where the characters are exaggerated into their roles, and a lot of mystery and suspense is created. ...read more.

In the second epoch, it has been six months after Laura and Percival's marriage. The reader does not know the specifics of what happened during that time. Laura's character seems much more reserved and she does not like to approach the subject of her marriage, therefore the reader wonders what is it that happened that makes her not want to talk about it. In general throughout the novel we don't get much dialogue out of Laura, but going by Marian's judgement, it is obvious that she is much more reserved than usual. Throughout the novel, although we are left with so many questions, they are also answered for us as we continue reading. Why did Percival not say anything to Laura after finding out who her true love is? Did he already know, is that why he's not so surprised? Does he not care? Obviously he doesn't love her because he continued to marry her knowing full well that Laura loved someone else. Even an outsider can clearly see that Percival only wants Laura for her money, otherwise he wouldn't go to such lengths for the money to be arranged and be so persistent about it. ...read more.

Laura is really alive, but how? He wants the readers to buy the next one and wait in anticipation, to find out what is going on. The reader already has suspicions that it could be Anne Catherick we know that Anne suffered from a weak heart, whereas Laura was in fine health. In the third epoch all the many questions that we had are finally answered. We find out that Percival's big secret was that he was born illegitimately and he did not want anyone to know as it might ruin his reputation. We also discover that Fosco and Percival were in on the plot together to claim the money. The reason for why Anne and Laura resembled each other so much is because they had the same father. Anne and Laura's bodies were swapped so really Anne Catherick died. There is more back-story given of Mrs Catherick, Anne, and Fosco's past. Walter is on a mission to prove all of this and prove Laura's existence and a nice conclusion is placed where they get married so they live happily ever after. Good conquers evil, as it should be. Gothic novels have mystery and suspense as a fundamental part of the narrative, and it is apparent that this is true in 'The Woman In White'. Memoona Khalid 1 ...read more.