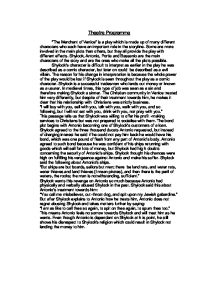 Theatre Programme - The Merchant of Venice

Theatre Programme "The Merchant of Venice" is a play which is made up of many different characters who each have an important role in the storyline. Some are more involved in the main plots than others, but they all provide the play with different effects. Shylock, Antonio, Portia and Bassanio are the main characters of the story and are the ones who make all the plots possible. Shylock's character is difficult to interpret as earlier in the play he was described as a comic character, but later on could be described as a evil villain. The reason for his change in interpretation is because the whole power of the play would be lost if Shylock is seen throughout the play as a comic character. Shylock is a successful tradesman who lends out money or known as a usurer. In medieval times, this type of job was seen as a sin and therefore making Shylock a sinner. The Christian community in Venice treated him very differently, but despite of their treatment towards him, he makes it clear that his relationship with Christians was strictly business. ...read more.

"Here comes Bassanio, your most noble kinsman, Gratiano, and Lorenzo. Fare ye well, we leave you now with better company. Salerio: I would have stayed will I had mad you merry, if wothier friends had not prevented me." Bassanio is determined to woo Portia and needs three thousand ducats to furnish his suit. When he eventually arrives to choose the casket of his dreams, he picks the correct casket and pleases Portia with his charms. Relationships are the most important aspects in Bassanio's life, whether it is between his friends or with Portia. "The Merchant Of Venice" is concerned with two issues that were of importance in the Elizabethan time: Jewry and Usury. The Christian reaction and attitude towards Jews was hostile and that the execution of Rodrigo Lopez in 1594 was characteristic of the Christian rejection of al Jews. Jews were forced to convert to Christianity to live in England, once they did they were generally left alone. Usury was an important issue during Shakespeare's time. Shylock is the typical picture of the usurer that most of the Elizabethans had and who is never accepted. ...read more.

As a member of the audience, the play was received and acted as a comedy but the triadic was not lost through Shylocks character. The scenes of drama were expressed by each character with lots of enthusiasm and they all felt as though they were the main character. The stage was like the entire world in a few paces for the actors and actresses, and in those few paces the whole importance of the play was captured and delivered to the audience. As a reader I think this play is another one of Shakespeare best along with 'Macbeth' and 'Romeo And Juliet'. This dramatic comedy is enjoyable because this is one of his plays which will make you think of how much has changed in the world. Racism and hatred between religion echoes around the Elizabethan society and is not much different from other everyday activity such as having an evening meal. This play has many comedy acts and will take the focus off the main plot for a bit to give readers a break from one large continuous storyline. There are also many dramatic scenes which make a exciting climax in the main plot. "The Merchant Of Venice" combines the important ingredients of a good comedy and a drama to create this play. ...read more.