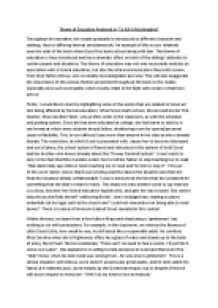 Theme of Education Analysed in &quot;To Kill A Mockingbird&quot;

﻿Theme of Education Analysed in ?To Kill A Mockingbird? Throughout the narrative, the reader gradually is introduced to different character and settings, thus to differing themes simultaneously. An example of this occurs relatively near the start of the book when Scout first starts school along with Jem. The theme of education is thus introduced and has a dramatic effect on both of the siblings? attitudes to certain people and situations. The theme of education may not only necessarily indicate an association with a formal education, but also the vital moral education they both receive from their father Atticus, who is notably knowledgeable and wise. This will also exaggerate the importance of the various themes presented throughout the book to the reader, especially ones such as empathy which closely relate in the fight with racism in that time period. Firstly, I would like to start by highlighting some of the points that are related to Scout ad Jem being affected by formal education. When Scout starts school, she encounters her first teacher, Miss Caroline Fisher, who prefers order in the classroom, as with the schedule and grading system. Since she has been educated at college, she has learnt to stick by a set format at which every student should follow, disallowing room for special/personal cases or flexibility. This, in turn affects Scout more than anyone in her class as she is already literate. ...read more.

Outside of the classroom, Scout and Jem are educated by their father, and learn the great value of empathy and getting into another persons? ?skin?. Thus peoples? privacy must be respected, the feelings of other people must be considered before judgement. A strong emphasis of this in the book is on Boo Radley due the mysterious behaviour he shows by not coming out of his house. Even Scout and Jem at the start of the novel have prejudices about Boo, because of the rumours they heard and enhanced themselves. This leads them to become eager about actually seeing Boo, but their measures become too far; Atticus warns Scout and told her she must become considerate and leave Boo alone; she must ?walk in their shoes?. This idea of empathy is mentioned four times throughout the novel by Atticus specifically, showing the importance of this theme. Maycomb is seen to be a Christian town, with its old-fashioned ruins and existing church. However we do see through the book that a lot of the people in Maycomb do not act in a Christian manner, as with their prejudices and suspicions. There are a minority of people in Maycomb who are strict religious followers, one of which is famously known, Mr Radley. Miss Maudie teaches Scout that she herself is a Baptist but not a ?foot-washing? one as described for Mr Radley; she tells Scout that they say she is going to hell just because she grows flowers. ...read more.

Another lesson, Scout learned from Miss Maudie was the destruction prejudice could cause in a society. She explains that prejudice is the main root of most of Maycomb?s mistakes and problems. The fact that the author uses an example of this effect for objects that the reader can understand, makes the effect of prejudice seem more real and destructive; ?one sprig of nut-grass can ruin whole yard?. The nut-grass, in this case, would be prejudice and the yard, Maycomb. Scout learns a lot about life from Miss Maudie as with Atticus because she is level headed and a role model to her. In summary, I have focused closely on the effect of education on Scout and Jem, in one form or another, and have arrived at a conclusion that they are educated formally and informally, at school and at home. They have been mainly influenced by adults who have more experience in life than them which is reassuring for them and for the reader. Also, education is delivered through an occurring of events, not just advice given; for example when Scout has her first days at school, she experiences a widespread of confrontations with both adults and children. The education system has a dramatic effect on the opinions of Scout and how she conducts herself at home; the system is corrupt and rigid, not being able to cater for special exceptions. This much forebodes how the trial similarly operates later on in the plot. ...read more.