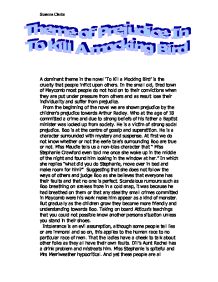 Theme of prejudice in 'To Kill a Mocking Bird'

A dominant theme in the novel 'To Kill a Mocking Bird' is the cruelty that people inflict upon others. In the small old, tired town of Maycomb most people do not hold on to their convictions when they are put under pressure from others and as result lose their individuality and suffer from prejudice. From the beginning of the novel we are shown prejudice by the children's prejudice towards Arthur Radley. Who at the age of 18 committed a crime and due to strong beliefs of his father a Baptist minister was locked up from society. He is a victim of strong social prejudice. Boo is at the centre of gossip and superstition. He is a character surrounded with mystery and suspense. At first we do not know whether or not the eerie tale's surrounding Boo are true or not. Miss Maudie tells us a non-bias character that " Miss Stephanie Crawford even told me once she woke up in the middle of the night and found him looking in the window at her." In which she replies "what did you do Stephanie, move over in bed and make room for him?" ...read more.

They represent the town's narrow-minded thinking and ways. Like Boo Mrs Dubose is a lonely outcast. She is a morphine addict and is cruel to others by no choice of her own. And is judged and penalised for it. Tom on the other hand was nothing but kind to Mayella Ewell, who later accused him of rape. Tom is black and did not stand a chance against Mayella and the jury although Mayella and her Father Bob Ewells story was totally unbelievable, Tom did not stand a chance purely because of the colour of his skin. Aunt Alexandra and the local women talk with great sympathy for poor African tribes but do not spare a thought for their neighbouring Negroes. Although Tom's conviction was wrong and unfair it seems to be accepted by the black people from his community. Although the court is supposed to be the most fair place Tom is prejudice against. Society could not imagine that Mayella Ewell could be so lonely and desperate for affection that she would have behaved the way Tom described. ...read more.

Boo's family have chosen for him to live this way and to be judged in such away that he is viewed as a freak and an outcast. Socially depressing him and literally cutting him off from society even when he simply tries to send messages to Jem and Scout with simple gifts Mr Nathan Radley covers up the whole in the tree stopping all communication. At the end of the novel we then find out that Boo is a normal decent man who saves Jem and Scout from Mr Bob Ewell when he attacks them after the Halloween event. Tom on the other hand could not prevent his prejudice and no matter what a great caring and loving man he was would never be respected or believed over a white women. " I did not appreciate the subtlety of Tom's predicament, he could not have dared to strike a white woman under any circumstances and expect to live long, so he took the first opportunity to run." By the end of the novel Scout and Jem have grown up and realised that they do not have to follow the ways of Maycomb but to stand up for what they believe in and not to follow the town's prejudice and evil, cruel ways. Susanna Clarke ...read more.