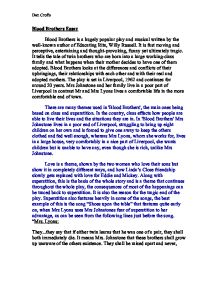 Blood Brothers Essay Blood Brothers is a hugely popular play and musical written by the well-known author of Educating Rita, Willy Russell. It is fast moving and perceptive, entertaining and thought-provoking, funny yet ultimately tragic. It tells the tale of twin brothers who are born into a large working-class family and what happens when their mother decides to have one of them adopted. Blood Brothers looks at the differences and conflicts of their upbringings, their relationships with each other and with their real and adopted mothers. The play is set in Liverpool, 1962 and continues for around 20 years. Mrs Johnstone and her family live in a poor part of Liverpool in contrast Mr and Mrs Lyons lives a comfortable life in the more comfortable end of town. There are many themes used in 'Blood Brothers', the main ones being based on class and superstition. In the country, class effects how people are able to live their lives and the situations they are in. In 'Blood Brothers' Mrs Johnstone lives in a poor end of Liverpool, struggling to bring up eight children on her own and is forced to give one away to keep the others clothed and ...read more.

There's also the theme of friendship, linked between Mickey, Eddie and Linda and how they are all friends, but it gradually brakes apart, Mickey and Linda's friendship develops into love, and Mickey and Eddie's friendship firstly breaks up when Eddie is forced to move away by his parents, then again later in the play when Mickey becomes depressed he begins to become jealous of Eddie, again leading up to the tragic consequences. Hate then becomes part of the play, as Mrs Lyons comes to despise Mrs Johnstone because of the situation both women are in with the twins. Violence features heavily in the play. The most notable example of physical conflict is when Mickey shoots Eddie. The audience are reminded of the superstition that the brothers would die if they were to find out they were in fact twins. This builds dramatic tension and then this tension dies away after the climax of the shooting. The verbal conflict in the play takes place mainly between the female characters. A striking example is when Mrs. Lyons goes in to Mrs. ...read more.

As the story progresses the Narrators Speeches are gradually getting more serious as time goes on, until right before the shooting when he is literally shouting out trying to warn them. This is Probably the reason that the Narrator is usually presented as quite a shady character, who is telling the story through someone else's eyes other than the people involved giving us a better idea of what's going on, from the view of someone there, and someone who is not biased at all. This is much better as the viewer can relate to what the Narrator is seeing; yet he adds much more to the overall suspense and excitement. The Narrator also plays a important part in keeping the story flowing, because he acts as a vital of link between each part of the play, this means that he can give hints about the next scene and act without anything being preformed, this results in the audience being more entertained by the suspense even though nothing important or exiting may be happening at that time in the play. ?? ?? ?? ?? Dan Crofts ...read more.