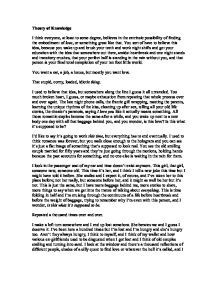 Theory of Knowledge I think everyone, at least to some degree, believes in the extrinsic possibility of finding the embodiment of love, or something great like that. You sort of have to believe this idea, because you wake up and brush your teeth and work night shifts and get your education with the idea that somewhere out there, amidst heartbreak and one night stands and transitory crushes, that your perfect half is standing in the rain without you, and that person is your final total completion of your ten foot little world. You want a car, a job, a house, but mostly you want love. That stupid, corny, loaded, idiotic thing. I used to believe that idea, but somewhere along the line I guess it all unraveled. Too much broken heart, I guess, or maybe exhaustion from repeating that whole process over and over again. The late night phone calls, the frantic gift wrapping, meeting the parents, learning the unique rhythms of the kiss, cleaning up after sex, telling all your old life stories, the cheater's paranoia, saying I love you like it actually means something. All those romantic staples become the same after a while, and you wake up next to a new body one day with all that baggage behind you, and you wonder, is this love? Is this what it's supposed to be? ...read more.

She doesn't know this because she actually thinks I'm normal. Or sane, or whatever the hell I used to be before I had to jump into the motions again. Ah yeah, I'm on the wrong interstate now, so I get this crazy idea to drive over the median through the grass to make a u-turn. This is a bad idea because your car can get stuck in the decline or you can pop your tire on the incline, but I do it anyway, and the girl (what girl?) calls me insane. She sees the cracks through the holograms for a second and knows I'm completely out of my mind. I expect her to say something degrading but she doesn't, and that's a little weird, because I just did something stupid (I've done this before?) and she's supposed to look at me with disgust and call me an idiot (moron, nincompoop, dumbass). But she just laughs and we're on the road again, and I look at the reflection in the window and right then, no one is there but her. For a second, I think well that was different, and then the moment goes away. (she just saw my insanity and she's okay with that?) We find this Thai restaurant and the sun's already fading, a big yellow ball of wax in the sky. ...read more.

And we're in the car again and she's clearly enjoying herself, taking pictures and making fun of my ears and laughing about something, and I wonder if she's just acting her part. Except I can smell out acting (like I have so many times before), and this time, when I wonder Is this what it's supposed to be?, I actually think that, yeah, I think it is. People like to say it's different this time, but what if the scary possibility that it's true this time is actually true? What if she's, you know, for real? That might be worse than repeating this story over again. Because in five weeks, five months, five years, it might not matter anymore. She'll be a face in that sea of faces, another item to pull through baggage claim, and I'll be on the quest again. All things eventually must end, and that's the whole problem with this love thing, because you can't really go back to being innocent and na�ve and totally trusting the idea that somewhere out there, standing in a torrent of horrible weather, is that perfect person waiting to embrace your every imperfect quality. That idea is behind me. But I guess sometimes, you have to make a crazy u-turn. You get lost this time, and all you can really do is just start all over. ...read more.