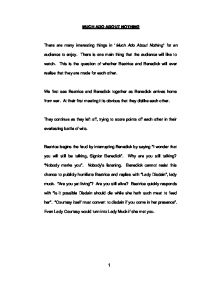 There are many interesting things in 'Much Ado About Nothing' for an audience to enjoy. There is one main thing that the audience will like to watch. This is the question of whether Beatrice and Benedick

MUCH ADO ABOUT NOTHING There are many interesting things in 'Much Ado About Nothing' for an audience to enjoy. There is one main thing that the audience will like to watch. This is the question of whether Beatrice and Benedick will ever realise that they are made for each other. We first see Beatrice and Benedick together as Benedick arrives home from war. At their first meeting it is obvious that they dislike each other. They continue as they left off, trying to score points off each other in their everlasting battle of wits. Beatrice begins the feud by interrupting Benedick by saying "I wonder that you will still be talking, Signior Benedick". Why are you still talking? "Nobody marks you". Nobody's listening. Benedick cannot resist this chance to publicly humiliate Beatrice and replies with "Lady Disdain", lady muck. "Are you yet living"? Are you still alive? Beatrice quickly responds with "is it possible Disdain should die while she hath such meat to feed her". "Courtesy itself must convert to disdain if you come in her presence". Even Lady Courtesy would turn into Lady Muck if she met you. Benedick then says "but it certain I am loved of all ladies only you accepted". All women love me apart from you "for truly I love none" and I love none of them. Beatrice comes back with "A dear happiness to women, they would else have been troubled with a pernicious suitor". That is great for women because this means that they don't have to put up with an ignorant pig like you". ...read more.

He explains how she has demoralised him and how she has completely got rid of any self-respect that he did have for himself. The audience will learn that Benedick acts like he is high and mighty, but if anyone does call him behind his back or even to his face he is made to feel like a very small, insecure man with no self-respect. After Benedick's outburst it was clear to the audience that he has been hurt and humiliated by Beatrice's words. However the strength of his emotions suggests that he does have some deeply buried feelings for her. After Claudio and Hero decide to get married, Don Pedro is in a romantic mood and asks if Beatrice wishes to marry. He also asks if she has feelings for Benedick. She tells him that she did once have feelings for Benedick and they once had a relationship. But Benedick cheated on Beatrice, "before he won it of me, with false dice" and she still seems to be very upset. This could be the reason why Beatrice is always quarrelling with Benedick. Moving on to Act 2, Scene 3, we se a Benedick bewildered by the effects of love on his friend, Claudio. At the beginning of the scene Benedick is talking in soliloquy. He is annoyed with Benedick. He says that Claudio was a brave man that used to laugh at people that fell in love, "he hath laugh'd at such shallow follies in others". He also says that he used to like war instruments like the "drum and the fife" but now he likes love instruments like "the tabor and the pipe". ...read more.

She then admits that she loves him, "I love you with so much of my heart". He asks if he can do anything for her and she replies "Kill Claudio" Straight a way he says "ha, not for the wide world". She then says that Benedick would rather have friends than fight with his lover's enemy. I think she has said this to make him feel bad so that he would kill Claudio. She carries on persuading Benedick to go and kill Claudio. After much persuading Benedick gives in and decides to challenge Claudio. The audience will find a few things dramatic in this scene. One of these things is the fact that Benedick is the one that lets all his emotions and feelings out. Another thing that they will find emotional is the fact that this is the first time that we have seen Beatrice and Benedick express their true feelings. At the end of the play everyone makes up and becomes friends. Benedick does not kill Claudio, which is much to the audience's relief. Claudio is made to marry Leonato's, brother's daughter because everyone has been made to pretend that Hero has died of a broken heart and Claudio is marrying in guilt. Claudio finds out that the women he is about to marry is actually Hero in disguise which brings about happiness to everyone. The wedding finally brings Benedick and Beatrice together as they confess their love for each other "no more than reason", making it a double wedding. The audience will remember that it is their love of "reason" and a battle of wits that has brought them together in the first place. Total Words = 2795 ?? ?? ?? ?? ...read more.