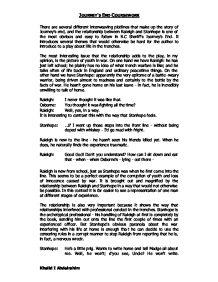 There are several different interweaving plotlines that make up the story of Journey's end, and the relationship between Raleigh and Stanhope is one of the most obvious and easy to follow in R.C Sheriff's Journey's End.

There are several different interweaving plotlines that make up the story of Journey's end, and the relationship between Raleigh and Stanhope is one of the most obvious and easy to follow in R.C Sheriff's Journey's End. It introduces several themes that would otherwise be hard for the author to introduce to a play about life in the trenches. The most interesting issue that the relationship adds to the play, in my opinion, is the picture of youth in war. On one hand we have Raleigh: he has just left school; he plainly has no idea of what trench warfare is like; and he talks often of life back in England and ordinary peacetime things. On the other hand we have Stanhope: apparently the very epitome of a battle-weary warrior, being driven almost to madness and certainly to the bottle by the facts of war. He hasn't gone home on his last leave - in fact, he is incredibly unwilling to talk of home. Raleigh: I never thought it was like that. ...read more.

He won't write. Censorship! I censor his letters - cross out all he says about me. Osborne: You can't read his letters. Stanhope: (dreamily) Cross out all he says about me. Osborne opposes him, since this is plainly a perversion of the system. Fortunately Stanhope's fears were unfounded, but this behavior is still unacceptable. The exchange between Stanhope and the Colonel also appears to be an example of Stanhope's relationship with Raleigh affecting his normal conduct. Stanhope tries not to let Raleigh be sent out on such an apparently suicidal daylight raid, when he has only been in the war a couple of days. He suggests sending a sergeant instead of an officer before the Colonel suggests Raleigh, and then tries to persuade the Colonel not to send him. Stanhope: Raleigh? Colonel: Yes. Just the type. Plenty of guts - Stanhope: He's awfully new to it all - Colonel: All to the good. His nerves are sound. Stanhope: It's awful to send a fellow who's only just arrived. It seems as if Stanhope is subconsciously putting the protection of his friend as more important than the mission, which would be unprofessional, but perhaps justified. ...read more.

His feelings for her interfere in his relationship with Raleigh hugely at the beginning of the play, but at the bitter end Stanhope shows how he really cares for Raleigh. They call each other by their first names, "Dennis" and "Jimmy", and Stanhope does his best to reassure the boy, even though he knows that it is a mortal wound. Raleigh: What's - on my legs? Something holding them down - Stanhope: It's alright, old chap; it's just the shock - numbed them. Even though Stanhope knows that Raleigh's inability to feel his legs is due to severance of the spinal cord, he never lets Raleigh think that things are not going to be all right. He shows that he really cares for Raleigh, especially in his "listless" behavior after Raleigh's death. Without the relationship between Raleigh and Stanhope the play would be robbed of much of its depth and life. It is the vehicle for much of the play's most emotional moments, especially in the tragic close of the work, when their true deep friendship is really revealed. Without it, the play would be much less interesting, absorbing and involving. JOURNEY'S END COURSEWORK Khalid I Abdelrahim ...read more.