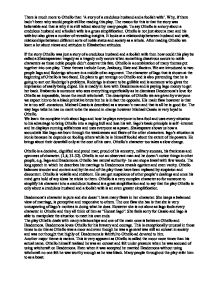 There is much more to Othello than 'A story of a credulous husband and a foolish wife'.

There is much more to Othello than 'A story of a credulous husband and a foolish wife'. Why, if there hadn't been why would people still be reading this play. The reason for this is that the story was believable and that is why it is still talked about by many people. To say Othello is a story about a credulous husband and a foolish wife is a gross simplification. Othello is not just about a man and his wife but also gives a number of revealing insights. It looks at a relationship between husband and wife, relationships between different sorts of noble status and society as a whole. After reading Othello we learn a lot about views and attitudes in Elizabethan attitudes. If the story Othello was just a story of a credulous husband and a foolish wife then how could this play be called a Shakespearean tragedy as a tragedy only occurs when something disastrous occurs to noble characters as these noble people didn't deserve this fate. ...read more.

Iago's situation is ironic because he depends on fooling others while he is himself fooled about the extent of his powers. He brings about their downfall only at the cost of his own. Othello's character too takes a slow change. Othello is a decisive, dignified and proud man; proud of his ancestry, military success, his frankness and openness of character. (1,ii, 31-32). Othello is not an observant man and he doesn't notice things in other people, e.g. Iago and Desdemona. Othello has natural authority- he can stop a brawl with few words. The long speech in which he describes his marriage to Desdemona reveals egotism and even vanity. Othello balances wonder and content and by the end of the play these have been replaced by suspicion and discontent. Othello is volatile and stubborn. He can get suspicious of other people's dealings and once his mind gets hold of any ideas he sticks to them. Othello is a very complex character so for someone to simplify his character into a credulous husband is a great simplification ...read more.

Jealousy is a key theme in the play Othello and that is what causes Othello to be such a great play. Iago is jealous of Cassio as he feels that he deserves the promotion instead of him. He plans to bring Cassio and Othello down because of this. However at the start of the play the idea had never occurred to him to use Desdemona and Michael Cassio to bring down Othello. At the end of the play he is basically asking Othello to murder his wife. Iago's character grows more and more evil. "Othello" Is a very complex story and brings a group of characters all of who are so different at first but as you read further and further into the play you see how similar they all really are and how all of them have weaknesses. At first you may think of it as simply a love story but it has many other themes that include Racism, Hate, Jealousy. So to say "Othello is about a credulous husband and a foolish wife is a gross simplification and is not at all justified. ...read more.