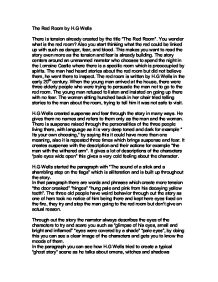 There is tension already created by the title The Red Room. You wonder what is the red room? Also you start thinking what the red could be linked up with such as danger, fear, and blood

The Red Room by H.G Wells There is tension already created by the title "The Red Room". You wonder what is the red room? Also you start thinking what the red could be linked up with such as danger, fear, and blood. This makes you want to read the story even more as the tension and fear is already building. The story centers around an unmanned narrator who chooses to spend the night in the Lorraine Castle where there is a specific room which is preoccupied by spirits. The man had heard stories about the red room but did not believe them, he went there to inspect. The red room is written by H.G Wells in the early 20th century. When the young man arrived at the house, there were three elderly people who were trying to persuade the man not to go to the red room. The young man refused to listen and insisted on going up there with no fear. The women sitting hunched back in her chair tried telling stories to the man about the room, trying to tell him it was not safe to visit. ...read more.

In the paragraph you can see how H.G Wells tried to create a typical "ghost story" scene as he talks about omens, witches and shadows creeping up the walls. These words are stereo typical in a ghost or horror story. H.G Wells atmosphere through the story is very high as everything seen and one in the story is described. He describes the house to be old, doors creaking, very dark, and old fashioned. Also there is a lot of repetition of phrases and "this night of all nights". There is also repetition of the elderly fear, darkness and shadows, which builds up a lot of suspense. On the way to the red room the man described his way and what he saw, he described everything to be old fashioned, dusty, dark this is very much like a typical castle and ghost story, he uses personification to describe the room "shadows cower and quiver". He also describes the ornaments he saw along the way to the red room in great detail, by this he was trying to build up the climax before reaching the room. ...read more.

For example "ay, she broke in" "and eight-and-twenty years you have lived". This creates tension in the story as it is very old fashioned. H.G Wells uses similes such as "closed upon me like thee shutting of an eye" this makes the story more interesting to read. There are also metaphors used such as "like a ragged cloud sweeping out the stars" this makes the story livelier. There is a lot of darkness through out the story "wrapped about me in a stifling embrace", "crushed.... Reason fro my brain" using dark phrases like these creates suspense in the story and are used in horror stories. After analyzing the "The Red Room" I found it was an interesting and fascinating story, as I can relate to being fearful. I found that the way it was written using personifications and alliteration it made it much more enjoyable to read. There was so much suspense in the story right from the beginning as you start asking questions about what is the red room?, as it is an interesting title you want to read the book all the more. Vicky Williams 11.7 ...read more.