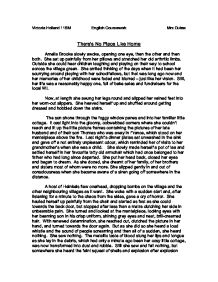 There's No Place Like Home Amelia Brooke slowly awoke, opening one eye, then the other and then both. She sat up painfully from her pillows and stretched her old arthritic limbs. Outside she could hear children laughing and playing on their way to school across the village green. She smiled thinking of the days when it had been her scurrying around playing with her schoolfellows, but that was long ago now and her memories of her childhood were faded and blurred - just like her vision. Still, her life was a reasonably happy one, full of bake sales and fundraisers for the local WI. Now, at length she swung her legs round and slipped her veined feet into her worn-out slippers. She heaved herself up and shuffled around getting dressed and hobbled down the stairs. The sun shone through the foggy window panes and into her familiar little cottage. It cast light into the gloomy, cobwebbed corners where she couldn't reach and lit up the little picture frames containing the pictures of her late husband and of their son Thomas who was away in France, which stood on her mantelpiece above the fire. Last night's dinner plates sat unwashed in the sink and gave off a not entirely unpleasant odour, which reminded her of visits to her grandmother's when she was a child. ...read more.

Then, taking a seat next to his lieutenant, added in a mutter: "What's wrong with the lad? We're just as bad off as he is sir, why can't he just learn to take it like a man?!" "Because he isn't one!" yelled Brooke jumping up and towering over his second in command. The other men in the trench all stopped what they had been doing and stared at the two men, the young boy continued to whimper pathetically. Brooke glared around at his battalion and continued in a far quieter voice, his tone venomous. "Can't you see what's going on here, you fool?! That boy is scared out of his mind at the mere thought of going over the top! And do you know why? Hmm? It is because as soon as we do go over the top every man and boy here will either be shot or blown to smithereens, and if any man tries to stop it, he'll be court-marshalled and bally-well shot! So if you can take that for what it is and still keep a stiff upper lip about you then you are a braver man than I and than any man I've ever met before." ...read more.

"Atkinson..." he said, then continuing in a kind but stern voice. "David, control yourself. David, we are all scared, but we must not let our emotions overcome us. Do you hear me?" "Yes Sir." "Now, when you go home to your mother, you will meet a nice young girl whom you love very dearly and you will go on to spend the rest of your life with her. However, to do that you must first get through this. Now, you will survive this, but you have to try. Will you do that for me? Will you do that for your mother?" "Yes, Sir." * * * * * As the train pulled into the country station a man, around twenty-three years old stepped casually off and onto the platform. He breathed in deeply and looked around him; everywhere he looked he saw smiling faces and happy families. Dark memories of war clouded his mind; he shook them away and started at a brisk walk towards the town. He sat in the cool church watching the young couple stood at the altar beaming at each other. He listened to the vicar as he droned on, "Do you David Atkinson take Anna Phillips...?" "You see Thomas old chap? Life goes on.." Brooke thought to himself. Victoria Holland 11BM English Coursework Mrs Dukes ...read more.