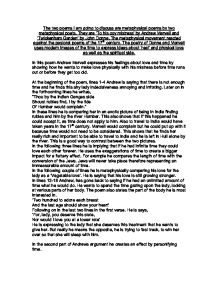 They are 'To his coy mistress' by Andrew Marvell and 'Twickenham Garden' by John Donne. The metaphysical movement reacted against the pastoral poems of the 17th centur

The two poems I am going to discuss are metaphysical poems by two metaphysical poets. They are 'To his coy mistress' by Andrew Marvell and 'Twickenham Garden' by John Donne. The metaphysical movement reacted against the pastoral poems of the 17th century. The poetry of Donne and Marvell uses modern images of the time to express ideas about 'real' and physical love as well as the spiritual side. In this poem Andrew Marvell expresses his feelings about love and time by showing how he wants to make love physically with his mistress before time runs out or before they get too old. At the beginning of the poem, lines 1-4 Andrew is saying that there is not enough time and he finds this shy lady indecisiveness annoying and irritating. Later on in the forthcoming lines he writes, "Thou by the Indian Ganges side Shoust rubies find, I by the tide Of Humber would complain." In these lines he is comparing her in an exotic picture of being in India finding rubies and him by the river Humber. This also shows that if this happened he could accept it, as time does not apply to him. ...read more.

The poem tells her that when she dies, the worms in the ground will take her virginity and her honour away from her. 'Worms shall try That long preserved virginity, And your quaint honour turn to dust' In the last two lines Andrew makes a humorous joke, he expresses that although the graves a private place but, they cant make love in the grave. This rhyme defuses the image the reader has just been given. In the concluding part of this poem, Andrew clarifies what he wants them to do now. He starts by describing in lines 33-36 that while they are still young and still have passion they should make love now, rather than waiting till their, 'Instant fires' to die out. Andrew uses the words 'instant fires' to describe their immediate passion they have. In the next four lines he tells her, when they make love, it should be physical. He uses the image of amorous birds making love as an example of what they should be doing. In addition to this they should be hungry for each other. 'and must not be wasting time, Rather at once our time devour Than languish in his slow-chapt power' The quotes provide a powerful image of his ideas of power and passion. ...read more.

Continuing his argument in lines 1-4 in the 3rd verse he says that the lovers come, to his fountain and take his tears which represents true love. Then he says to taste his tears and their partners tears and taste hem, if the partners tears don't taste like his then her live is not true. In the next two line the tone changes from bitterness to being forthright sounding. John achieves this tone by addressing directly, he is being bold and honest. The effects are strong, getting his warning about what he thinks of women through clearly. 'Alas, hearts do not in eyes shine, Nor can you more judge womans thoughts by tears,' In the last two lines John repeats the words 'true' and 'truth' 3 times. This constructs an effective emphasis of what he feels. He explains that he that she is already married and truthful to her husband, therefore she cannot return his love. These two poems showed different aspects of love in different perspectives. Out of the two poems I preferred Twickenham Garden. I preferred this poem because of its effective use of metaphors and adjectives, with brings the poem to life. Throughout poem the tempo changes as well giving it even more excitement and feel. I fought these aspects made the poem more moving and interesting. ...read more.