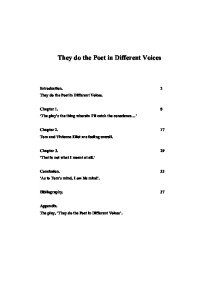 They do the Poet in Different Voices

They do the Poet in Different Voices Introduction. 2 They do the Poet in Different Voices. Chapter 1. 8 'The play's the thing wherein I'll catch the conscience...' Chapter 2. 17 Tom and Vivienne Eliot are feeling unwell. Chapter 3. 29 'That is not what I meant at all.' Conclusion. 33 'As to Tom's mind, I am his mind'. Bibliography. 37 Appendix. The play, 'They do the Poet in Different Voices'. Introduction. They do the Poet in Different Voices. T. S. Eliot was a master of the written word, both creatively and critically, he had the ability to write a phrase that could be both poignant and malicious, universal but personal, tightly structured yet hauntingly evocative of something pathetic. The critic Hugh Kenner discusses this phenomenon in 'The Invisible Poet', using the lines from The Love Song of J. Alfred Prufrock: I grow old ... I grow old ... I shall wear the bottoms of my trousers rolled. As Kenner writes, Eliot manages, 'to be ridiculous without being funny (the speaker is not making a joke) or cruel (a joke is not being made about the speaker). Their [the lines'] mechanism is allied to the mock-heroic but it doesn't burlesque anything.' (Kenner, 5) It is just this ambiguity and refusal to be easily categorised that make Eliot's work so memorable: the poems and even individual lines from each poem can mean so many diverse things to so many people. Using a wealth of personal associations he manages to screen his own perspective. Whilst it is exciting to search for what these poems mean to particular readers, what I wanted to look for was what they could have meant to the poet himself. Eliot employed ideas, images and structures from poets as varied as Dante and Laforgue, so I decided to attempt the same working practice, for as the mimic so you learn the art of the master. ...read more.

My nerves are so much better today. (She comes off the chair and although advancing toward him does not get that close. She reaches out an arm). Do you see, look, I've put on weight even though I have not been able to speak to anyone. (Whispering confidentially, the Hollow Men lean forward to catch as much as they can.) Everyone seems to be simply awfully busy with doing things. I can never do anything. (Conspiratorially) They've even taken away my books. (Accusingly towards the Hollow men who all pull back, embarrassed) They keep me away from everyone. Well, anyone from the outside, I am never allowed to see people. I only ever get to see the (said with much contempt) doctors. Have I told you that already? Although I am sure some of it is for the best. I mean, you would only ever do what was for the best. TSE I never came here Vivienne. I never came to see you. (She looks pained as if she understands this betrayal all too well, but it is a small gesture and passes as quickly as it came. She does not answer him, does not reproach him.) What is important to note is that Vivienne was not the only one to break down. She claims, 'T. is unbalanced,' and she is vindicated in her belief by his collapses. However, whilst she was institutionalised, Eliot turned his mental aberrations into poetry; 'On Margate Sands. I can connect Nothing with nothing. The broken fingernails of dirty hands. My people humble people who expect Nothing. (The Waste Land, lines 305 - 10) It was to Margate that he went to recover when he broke down in 1921. Far from alienating Vivienne he seemed to look to her more than before, and he clearly needed her opinion on the poetry that he was writing. Lyndall Gordon quotes one of his telling letters in her biography, ''I do not know whether it will do, & must wait for Vivien's opinion as to whether it is printable, ' he informed Schiff. ...read more.

The fervent anguish of The Waste Land had given way to the paralysis of The Hollow Men,' (Seymour-Jones, 439) Lyndall Gordon calls the life of T. S. Eliot 'An Imperfect Life', she ends her biography with his quest for a perfect life, the spiritual longing for sainthood that haunted his early years. 'If he could not live the perfect life himself, if he could not speak directly to his contemporaries, he still hoped his story would tell with generations to come, 'in a world of time beyond me'. (Gordon, 536) Certainly his words live on past the volumes of poetry or the scripts, critics or essays, but however hard I work at the erudite works I return again and again to the sounds of the poetry - somewhere between those images is something that slips tantalisingly out of reach. I cannot pin it down, but then I don't think I want to anymore. Eliot's was a life of contractions: the more suffocating and frustrating, the more conducive to the starkly, disconcertingly theatrical poetry. Vivienne was part of this inspiration: if it cost Eliot 'dearly', it cost her far more. However, such is her loyal deference to his genius that the only allusion made to his breakdown, his weakness, is at the very end: Voice (An efficiently mechanical woman's voice is heard across the auditorium.) Mrs Vivienne Eliot? Viv Yes. Voice Will you accept a reverse charge call from Margate? Viv Yes. Silence. Viv Is that you Tom? There is silence and then the sound of someone putting the receiver down very gently. The click is audible. The most poignant ending of all, for me, though is that of Eloit's, The Hollow Men: This is the way the world ends This is the way the world ends This is the way the world ends Not with a bang but with a whimper. It is a lot to ask of a single sound, but somehow I want that final telephone click to evoke this extreme sadness and sense of futility and disillusionment. If not for him, then for her. ...read more.