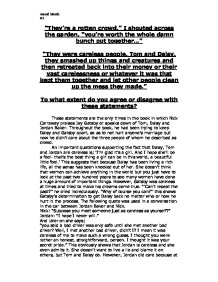 &quot;They're a rotten crowd,&quot; I shouted across the garden, &quot;you're worth the whole damn bunch put together&amp;#133;&quot; to what extent do you agree or disagree with these statements?

"They're a rotten crowd," I shouted across the garden, "you're worth the whole damn bunch put together..." "They were careless people, Tom and Daisy, they smashed up things and creatures and then retreated back into their money or their vast carelessness or whatever it was that kept them together and let other people clean up the mess they made." To what extent do you agree or disagree with these statements? These statements are the only times in the book in which Nick Carraway praises Jay Gatsby or speaks down of Tom, Daisy and Jordan Baker. Throughout the book, he had been trying to keep Daisy and Gatsby apart, so as to not hurt anyone's marriage but now he didn't care about the three people of whom he described as crowd. An important quotations supporting the fact that Daisy, Tom and Jordan are careless is; 'I'm glad it's a girl. ...read more.

Well, I met another bad driver, didn't I? I mean it was careless of me to make such a wrong guess. I thought you were rather an honest, straightforward, person. I thought it was your secret pride." This obviously shows that Jordan is careless and she even admits it. She doesn't want to live a lie and blame it on others, but Tom and Daisy do. However, Jordan did care because at the end of the book, at the funeral, only Gatsby's father, Nick and Jordan attended. She came to the funeral instead of playing in the Westchester golf tournament. Jordan is somewhat of a hypocrite though, saying she hates careless people even though she is one herself. Daisy on the other hand, does not care. She allows Gatsby to drive the car back and to take the blame for killing Myrtle Wilson and retreats into her money when she goes on holiday and gets the house re-done. ...read more.

He doesn't worry about himself anymore. He tries to run the lives of the other four main characters in the book, Daisy, Nick, Jordan and Gatsby's. He is an antagonist in the story, he seizes his opportunity of marrying Daisy while Gatsby is doing his duty. He uses his money in the form of a three thousand-dollar necklace to sweep Daisy off her feet and marry him even though he knows very well that she is in love with Gatsby. He treats Daisy very badly and doesn't really care because she couldn't make it in the world without him so he could do what he wanted. In conclusion, I agree with the statements in the title because a lot of the time the characters show their vast carelessness. Jordan admits it making her the bigger woman as so to speak. Daisy is very stubborn and wears white dresses to reflect this and Tom is hostile and treats people how he wants. Arnold Murthi 4:2 ...read more.