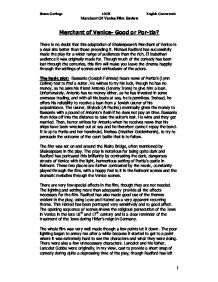 This adaptation of Shakespeare's Merchant of Venice is a deal site better than those preceding it. Michael Radford has successfully made the play for a wider range of audiences than the rich, Elizabethan audience it was originally made for

Merchant of Venice- Good or Por-tia? There is no doubt that this adaptation of Shakespeare's Merchant of Venice is a deal site better than those preceding it. Michael Radford has successfully made the play for a wider range of audiences than the rich, Elizabethan audience it was originally made for. Though much of the comedy has been lost through the centuries, this film will make you leave the cinema happily through the settings of scenes and enthusiasm of the actors. The basic plot: Bassanio (Joseph Feinnes) hears news of Portia's (Lynn Collins) test to find a suitor. He wishes to try his luck, though he has no money, so he asks his friend Antonio (Jeremy Irons) to give him a loan. Unfortunately, Antonio has no money either, as he has invested in some overseas trading, and with all his boats at sea, he is penniless. Instead, he offers his reliability to receive a loan from a Jewish usurer of his acquaintance. ...read more.

There are very few special effects in the film, though they are not needed. The lighting and setting more than adequately provide all the effects necessary for the film. Radford has also made good use of the themes evident in the play, using Love and Hatred as a very apparent recurring theme. This Hatred has been portrayed very sensitively and to good affect. The opening sequence of scenes shows the religious persecution of the Jews in Venice in the late 16th and 17th century and is a clear reminder of the treatment of the Jews during Hitler's reign in Germany. The whole film was very well made though a few points let it down. The poor lighting began to annoy me after a while because it started to get to a point where it was extremely hard to see the characters and what they were doing. There were also a few unnecessary characters. ...read more.

The other characters were blown away by Pacino's amazing ability to take any character and make it his own. Though the film is very much in the past, some people may find themselves in the same position as Portia. She is bound to her dead fathers will, though her future is destined by the outcome of this final testament. She tries to do what is best for her without disobeying her father's will. Others may find themselves in the same position as Lorenzo and Jessica. Religious hatred is still evident to this day and the situation they find themselves in may still apply today. They are torn between religions, Lorenzo being Christian and Jessica not really wanting to go against her father's Jewish religion. Finally, This play is well worth seeing. Its breathtaking scenery and captivating storylines will make anyone pleased that they have seen it, while not fully realising that they have just viewed on of Shakespeare's plays. This is because so many issues are still relevant in today's times. Rating= *** (/5) ?? ?? ?? ?? Simon Garlinge 10CH English Coursework Merchant Of Venice Film Review 1 ...read more.