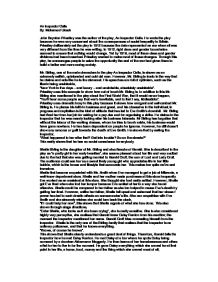 An Inspector Calls By: Mohamed Ukash John Boynton Priestley was the author of the play, An Inspector Calls. He wrote the play because he was very concerned about the consequences of social inequality in Britain. Priestley deliberately set the play in 1912 because the date represented an era when all was very different from the time he was writing. In 1912, rigid class and gender boundaries seemed to ensure that nothing would change. Yet by 1918, most of these class and gender divisions had been breached. Priestley wanted to make most of these changes. Through this play, he encourages people to seize the opportunity the end of the war had given them to build a better and more caring society. Mr. Birling, one of the main characters in the play An Inspector Calls, is shown as an extremely selfish, opinionated and cold old man. However, Mr. Birling is ironic in the way that he claims and acts like he is the cleverest. His speeches are full of optimism, such as the titanic being unsinkable, "New York in five days - and luxury - and unsinkable, absolutely unsinkable". Priestley uses this example to show how out of touch Mr. ...read more.

She regarded as an arrogant and dominating through out the play. She didn't have any sensitivity to the situation, "Quite of the key with the little scene that has just passed". . All the way through the act Mrs Birling has no remorse or guilt for what has happened to this girl. To her, the very matter of the death is beneath her and her family. In her mind, the death is a great shame, but nothing to do with her and nothing for her to worry about. She has the least respect for the Inspector of all the characters. Mrs. Birling also tried to intimidate him and force him to leave, then she was being mendacious towards the Inspector when she claims that she does not recognise the photograph that he shows her. However, Mrs Birling met Eva two weeks before her supposed death. Eva came to the Brumley Women's Charity Organization appealing for money and help to support her child. As Eva's child was conceived with Eric, she chose to take his surname. Mrs Birling took this offensively, thinking that the girl meant to be impertinent and lost her temper, which could be compared to Sheila's loss of temper, this led her to become prejudiced against her case from the start. ...read more.

Birling both try to intimidate the Inspector with their power and the close friendship Mr. Birling shares with the chief. Mr. And Mrs. Birling attitude towards the investigation only increases sympathy for Eva Smith. However, Eric and Sheila felt guilty and regretful. As Eric says, "Whoever that chap was, the fact remains that I did what I did", Eric is convinced that what the Inspector's story is true. Sheila also feels in the same as Eric does about Eva's death. "Between us we drove that girl to commit suicide". Conversely, Mr. And Mrs. Birling are actually amused about the little scene that happened. This is shown in the last scene when Mr. Birling imitates the Inspector, "(Imitating Inspector in his final speech) You all helped to kill her". This last scene shows that Mr. Birling has no social conscience, he is just glad that he escaped a public scandal. We see this attitude with Mrs. Birling as well. As she tells Mr. Birling, "They're over-tired, In the Morning they'll be as amused as we are". This attitude shown by Mr. and Mrs. Birling encourages the audience to side with Eva Smith, and with the working classes in general. Mr and Mrs. Birling's refusal to accept responsibility also gives the audience a glimpse of the abuse that Eva suffered at the hands of those in positions of power. ...read more.