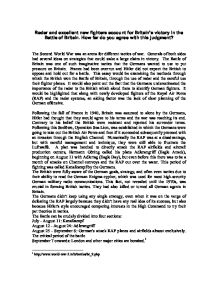 This essay would be examining the methods through which the British won the Battle of Britain, through the use of radar and the careful use their fighter planes. It

Radar and excellent new fighters account for Britain's victory in the Battle of Britain. How far do you agree with this judgment? The Second World War was an arena for different tactics of war. Generals of both sides had several ideas on strategies that could stake a large claim in victory. The Battle of Britain was one of such imaginative tactics that the Germans wanted to use to put pressure on Britain. France had been overrun and Hitler did not expect the British to oppose and hold out for a battle. This essay would be examining the methods through which the British won the Battle of Britain, through the use of radar and the careful use their fighter planes. It would also point out the fact that the Germans underestimated the importance of the radar to the British which aloud them to identify German fighters. It would be highlighted that along with newly developed fighters of the Royal Air Force (RAF) and the radar systems, an aiding factor was the lack of clear planning of the German offensive. Following the fall of France in 1940, Britain was assumed to alone by the Germans, Hitler had thought that they would agree to his terms and the war was reaching its end. ...read more.

The technology used allowed the radar to return to operation 6 hours after being attacked. They were taken off air and returned to operation after the German squads had passed. General G�ring later did not see the importance of the attacks on the radar systems and this tactical error became the RAF's advantage in upsetting the Luftwaffe. In the early phases of the battle the RAF was hamstrung by its reliance on obsolete fighting drills. These restricted their squadrons to tight 12 aircraft formations composed of three-aircraft "sections" in tight "V's" nicknamed 'vics'. With four sections flying together in tight formation only the squadron leader at the front was free to actually watch for the enemy, the other pilots had to concentrate on him and each other. RAF fighter training also emphasised by-the-book attacks by sections breaking away in sequence. The German pilots dubbed the RAF formations "Idiotenreihen" ("rows of idiots") because they left squadrons vulnerable to attack. They employed the looser and more flexible four-ship 'Schwarme' developed in the Spanish Civil War, using two pairs each consisting of leader and wingman. The frontline RAF pilots were acutely aware of the inherent deficiencies of their own tactics. ...read more.

Steer is also still in use, and these remnants are a testimony to the basic soundness of the system of 1940.3 The Battle of Britain marked the first time that the Nazis were stopped and that air superiority became clearly seen as the key to the war. Though the battle was small in the number of combatants and casualties, had the Germans triumphed the war would have taken a very different path. The British victory marked the first failure of Hitler's war machine. Modern military historians have suggested the Luftwaffe could not win the battle. Their numerical majority was not sufficient to achieve superiority over the technically advanced RAF. Dowding's and Park's strategy of choosing when to engage the enemy whilst maintaining a coherent force was totally vindicated.4 Overall the Battle of Britain was a British victory, although on a small scale compared to later battles it was significant, especially in increasing American anti-Nazi opinion. Although the Germans came very close to beating the RAF and thus setting the prerequisites for Seel�we, the switch to terror strategy allowed the RAF to recuperate and to defend against the attacks. The terror strategy in itself could not force the British to surrender. 5 1 http://www.world-war-2.info/battles/bt_9.php 2 http://en.wikipedia.org/wiki/Battle_of_Britain#RAF_tactics 3 http://www.raf.mod.uk/bob1940/controlsys.html 4 http://en.wikipedia.org/wiki/Battle_of_Britain#RAF_tactics 5 http://www.raf.mod.uk/bob1940/controlsys.html ?? ?? ?? ?? ...read more.