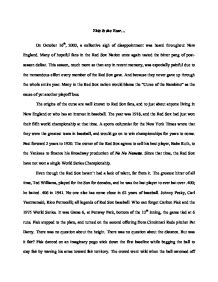 This Is the Year... On October 16th, 2003, a collective sigh of disappointment was heard throughout New England. Many of hopeful fans in the Red Sox Nation once again tasted the bitter pang of post-season defeat. This season, much more so than any in recent memory, was especially painful due to the tremendous effort every member of the Red Sox gave. And because they never gave up through the whole entire year. Many in the Red Sox nation would blame the "Curse of the Bambino" as the cause of yet another playoff loss. The origins of the curse are well known to Red Sox fans, and to just about anyone living in New England or who has an interest in baseball. The year was 1918, and the Red Sox had just won their fifth world championship at that time. ...read more.

Who can forget Carlton Fisk and the 1975 World Series. It was Game 6, at Fenway Park, bottom of the 12th inning, the game tied at 6 runs. Fisk stepped to the plate, and turned on the second offering from Cincinnati Reds pitcher Pat Darcy. There was no question about the height. There was no question about the distance. But was it fair? Fisk danced on an imaginary pogo stick down the first baseline while begging the ball to stay fair by waving his arms toward fair territory. The crowd went wild when the ball caromed off of the left field foul pole to give the Sox a 7-6 win, evening the World Series at three games apiece. Even with these heroics, the Red Sox still lost the Series to the Reds. ...read more.

They never gave up, and were on the heels of the first place Yankees all season. After making it into the playoffs as the Wildcard team, and coming back in the series against the Oakland As, the Red Sox looked unbeatable. And the series against the Yankees was a nail-biter, as dramatic as any series ever played before the two teams. But again, the Red Sox would loose, not only in the post-season, but against the much hated Yankees. History had repeated itself yet again. So what is the cause of all these heartbreaking losses? Bad management, poor players, an inability to rise above the pressure? Or are greater forces at work? Does a curse hang over Fenway Park, and all teams destined to play there? Or is it that the Red Sox, having lived under the prospect of a curse, given in and believe it, when no curse may exist? Only time, and the faith of the Red Sox Nation, will tell... ...read more.