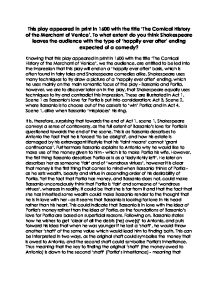 This play appeared in print in 1600 with the title The Comical History of the Merchant of Venice. To what extent do you think Shakespeare leaves the audience with the type of happily ever after ending expected of a comedy?

Portia's wish for Bassano to 'tarry', is conveyed through Portia's long speeches, which she embarks upon to ultimately try and delay time, and Bassanio's choice. However, Bassanio desire to 'choose' is obvious, simply as his short, snappy responses, causes a particularly 'on edge' scene for the audience. Portia's wish to delay Bassanio's choice is also conveyed by the utter length of her speeches, especially in the unprepared and disorderly manner in which she speaks, along with the repetition of the word 'but', and the fact that she 'prays' for Bassanio to 'tarry' a 'day or two' itself, illustrates the extent of her love, as she is desperate not to 'lose [him]' and is pleading with him to 'choose right', as well as the fact that she is considering to go behind her father's rules and 'teach him' the correct casket before he makes her 'wish a sin'. In addition to this, the fact that Portia considers to deliberately go against her father, shows how Portia is totally reliant on Bassanio, since she is desperate not to 'lose [his] company'. As well as this, Bassanio cuts Portia short of her speech right at the end, as he 'takes' her last three syllables, thus putting his desire for him to 'hazard' as simply as possible: 'let me choose'. Again, his desire to choose is demonstrated as his reaction to Portia's long speech is to respond with a short reply of three words. Shakespeare also depicts the love between the two, as the sentences in Portia's speech are multi-clausal, so the fact that Bassanio to some extent unconsciously 'steals' the last three syllables in the speech - thus making ten, shows how they are simultaneously one. ...read more.

This again, contradicts the idea that Bassanio is fully in love with Portia, yet this may be Bassanio's way of showing how he is grateful to Antonio, as he is ready to do whatever he pardons. Ultimately, Shakespeare does leave us the audience, with a 'happy' ending in spite of a few occasionally sinister hints throughout the novel - which is mainly conveyed through the 'love' scene in Act 3, Scene 2, as we see Bassanio and Portia together for the first time in the play. The fact that Bassanio and Portia marry so suddenly in the play could seem hasty, however, this could be a simple way to show the love that the couples (mainly Bassanio and Portia) share. However ultimately this is a play, therefore this is not meant to resemble reality as Shakespeare often bases his plays on fairy tales, including this one. Therefore a general rule of thumb of such a Shakespearean comedy, and of a fairy tale in general, is for couples to fall in love 'at first sight'. Therefore all things considered, to answer the question 'To what extent do you think that Shakespeare leave the audience with the type of 'happily ever after' ending expected of a comedy?' In my opinion, I think that Shakespeare ultimately does a good enough job to convince us the audience, that everything will work out picture perfect even though there are some indications that say otherwise, and that Shakespeare does a good enough job to leave us with a content 'happy ending' expected of a comedy. ...read more.