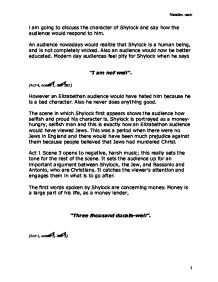 I am going to discuss the character of Shylock and say how the audience would respond to him. An audience nowadays would realize that Shylock is a human being, and is not completely wicked. Also an audience would now be better educated. Modern day audiences feel pity for Shylock when he says ''I am not well''. (Act 4, scene 1, line 392) However an Elizabethan audience would have hated him because he is a bad character. Also he never does anything good. The scene in which Shylock first appears shows the audience how selfish and proud his character is. Shylock is portrayed as a money- hungry, selfish man and this is exactly how an Elizabethan audience would have viewed Jews. This was a period when there were no Jews in England and there would have been much prejudice against them because people believed that Jews had murdered Christ. Act 1 Scene 3 opens to negative, harsh music; this really sets the tone for the rest of the scene. It sets the audience up for an important argument between Shylock, the Jew, and Bassanio and Antonio, who are Christians. It catches the viewer's attention and engages them in what is to go after. ...read more.

" Act 2, scene 8, lines 15-22)) This makes you wonder which he misses the most. This proves that he mistreats even his own daughter, and he values his money even more than his own blood. Shylock the Jew is the bad character in the play ' The Merchant of Venice'. Shylock mistreats Antonio the Christian, his daughter, Jessica and Launcelot. Jessica considers her home to be hell, and she calls Launcelot, a "merry little devil". (Act 2, scene 3, line 2) She even states that her father is Satan. Shylock mistreats his own daughter, by not loving her enough, even to the point where he complains about all of the money he is spending in a search to find her. "Why, there, there, there, there! A diamond gone cost me two thousand ducats in Frankford! The curse... ..ill luck stirring but what lights o' my shoulders; no sighs but o' my breathing; no tears but o' my shedding." (Act 3, scene 1, lines 63-72) He also mistreats her by keeping her locked up in her own house, by not letting her out, and by not letting her hear the Christian music around her. He orders her to: "Lock up my doors; and when you hear the drum... ...read more.

Shylock is determined and he shows no mercy: ''Tell not me of mercy... I'll have my bond... Thou calledst me dog before ... But since I am a dog, beware my fangs... I'll have my bond, and therefore speak no more...'' (Act 3, scene 3, lines 1-12) On the other hand, Shylock tries to let the audience feel sympathy for him and for all Jews, and shows some humanity when he says to Salerio and Solanio: ''Hath not a Jew eyes? Hath not a Jew hands... If you prick us, do we not bleed? If you tickle us, Do we not laugh? If you poison us, do we not die?..'' (Act 3, scene 1, lines 44-49) Villains are often antagonists in story plots and normally are a threat to the main character. Shylock is the villain of The Merchant of Venice and he threatens the life of Antonio. Villains normally have motives behind their evil doings and Shylock's motive is to have his revenge upon Antonio. In fact, Shylock is mad for revenge towards all Christians, especially Antonio. Shylock mistreats too many people but then suffers the loss of everything in the court, even his religion, as he is ordered to convert to Christianity. To conclude, Shylock is such a villain that his servant and even his own daughter Jessica hate him and are desperate to escape from him. ?? ?? ?? ?? Natalien nasir 1 ...read more.