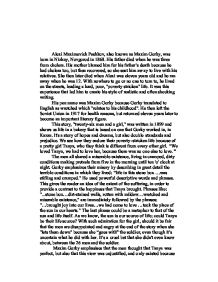 This story, &quot;twenty-six men and a girl,&quot; was written in 1899 and shows us life in a bakery that is based on one that Gorky worked in, in Kazan. It's a story of hopes and dreams,

Alexi Maximovich Peshkov, also known as Maxim Gorky, was born in Nizhny, Novgorod in 1868. His father died when he was three from cholera. His mother blamed him for his father's death because he had cholera too, but then recovered, so she sent him away to live with his relatives. She then later died when Alexi was eleven years old and he ran away when he was 12. With nowhere to go or no one to turn to, he lived on the streets, leading a hard, poor, "poverty stricken" life. It was this experience that led him to create his style of realistic and often shocking writing. His pen name was Maxim Gorky because Gorky translated to English as wretched which "relates to his childhood". He then left the Soviet Union in 1917 for health reasons, but returned eleven years later to become an important literary figure. This story, "twenty-six men and a girl," was written in 1899 and shows us life in a bakery that is based on one that Gorky worked in, in Kazan. It's a story of hopes and dreams, but also double standards and prejudice. ...read more.

"But anybody...to say such things we cut quickly and sharply to size, for we needed an object to love." "Perhaps we loved something that was not truly good" This is why the men are truly shocked when they find out that she is only human towards the end of the story. The description in the first part of the story and throughout really sets the scene of where they work, the conditions they work in, and the atmosphere and tone of their work life. This is achieved by superb, creative descriptive writing. For example "the window frames were barred on the outside with close-meshed grilles and the sunlight was unable to penetrate the flour covered glass."? This makes it seem as if they're in a prison with the barred windows, really showing how confined and separated they were from the outside world. Also, "There were twenty-six of us, twenty-six living machines - incarcerated from morning to night in a damp basement room." From this the reader is lead to believe that their lives are so monotonous and repetitive that they seem robotic. In the story the diets and living conditions of the men are also poor and unhealthy. ...read more.

In this final part of the story the girl is unknowingly placed in the middle of an unfair bet. The men don't even know her and have already asked so much of her. They have put all their trust and hopes in her and expect her to pass this "bet" Even though she has no idea about it, and she might not even be the person they expect her to be. When the girl does let them down, they get very angry and disappointed They run out of their damp, grim room where they spend so much of their lives and swarm round her. Hurling abuse at her from all directions. This is unfair and a perfect example of double standards because they set her up for it without her knowing so she probably never even thought it would harm anyone, That's if she even cared for them. Yet if one of them did something like that it would be perfectly normal, maybe even a game or fun. Tanya does get the last word and puts them back in their place before walking back into the shop. From there the men are ashamed and probably angry with themselves for putting her in that position and possibly the thought of them never seeing Tanya again. ...read more.