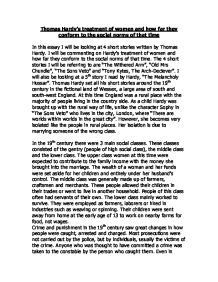 Also, the appearance of Phyllis in "The Melancholy Hussar" is really essential to the story. If she wasn't well groomed in the first place, then Humphrey would have never have been attracted over to the wall where she sat. Again, women's appearance played an essential role in "Tony Kytes, The Arch-Deciever". Tony's initial thoughts of each women he fell in love with, was what they looked like. If none had been beautiful then Tony wouldn't have looked twice. Their appearance definitely influenced Tony's opinions and decisions. When each woman is introduced in this story their appearance is the first thing mentioned, for example; "Milly Richards, a nice, light, small, tender little thing", "Unity Sallet, a handsome girl" and "Hannah Jolliver, another young beauty of the place at that time". Through out the short story all 3 women try and compete with their looks saying things like "And - can you say I'm not pretty, Tony? Now look at me!" and "Prettier than she?" Tony Kytes can relate to each of them. When Hardy was writing his short stories in the 19th century, women were expected to marry at all costs. If they did not, they would be considered a spinster (a woman that does not wish to marry or can't because of her looks). ...read more.

Thomas Hardy pays a lot of attention to his women characters and seems to be quite sympathetic towards them and their lack of rights in society. In my opinion, this is because Hardy was born in the 18th century where he was brought up in a society that looked poorly on the role of women and their rights. Nowadays a lot has changed! In the 19th century women could not go to school. If they got married they gave over most of their land to their husbands and it was considered a scandal to be caught having a baby out of wedlock. If that were to happen today a women would definitely not be in as much trouble as they would if they were living in 19th century times. In the 21st century, I think that many people, especially men, have the perception that it is a women's job to cook, clean and so on. These perceptions are still carried on from the 19th century where it was expected for women to do all the house work. Times have definitely changed, but I think that people and society will always classify women as the sex that is meant to do the house chores! From Thomas Hardy's short stories I have learnt that in the 19th a woman's power in society was over shadowed and dominated by men's wishes. By Cloe Mann ...read more.