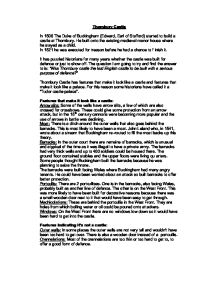 Thornbury Castle In 1508 The Duke of Buckingham (Edward, Earl of Stafford) started to build a castle at Thornbury. He built onto the existing medieval manor house where he stayed as a child. In 1521 he was executed for treason before he had a chance to finish it. It has puzzled historians for many years whether the castle was built for defence or just to show off. The question I am going to try and find the answer to is: "Was Thornbury castle the last English castle to be built with a serious purpose of defence?" Thornbury Castle has features that make it look like a castle and features that make it look like a palace. For this reason some historians have called it a "Tudor castle-palace". Features that make it look like a castle: Arrow slits: Some of the walls have arrow slits, a few of which are also crossed for crossbows. These could give some protection from an arrow attack, but in the 15th century cannons were becoming more popular and the use of arrows in battle was declining. Moat: There is a ditch around the outer walls that also goes behind the barracks. This is most likely to have been a moat. John Leland who, in 1541, wrote about a stream that Buckingham re-routed to fill the moat backs up this theory. ...read more.

In the 20th century it became a listed building so any work carried out on it has to be keeping with the original design. Thornbury Castle was acquired by the present owner in1966 and is now an exclusive hotel and restaurant. Buildings of the time No castles were being built in the 16th century because the country became more at peace and this greater feeling of security was reflected in the house design. Also, any wars fought were fought on fields so castles were not needed. Instead of castles, castle walls were built around towns to act as defence. I will now look at buildings of the time. Hampton Court Palace: This is architecturally the finest palace the British Crown possesses. Wolsey began to build it in 1514. It was built as a palace and Wolsey held many lavish parties here. It also had crennelations, tall towers, extravagant chimneys and a moat although this was most likely to have been for decoration. Richmond Palace: This was built by Henry VII in 1501. Richmond Palace was built with a moat, crennelations and a portcullis. It also had a lot of decorative features including oriel windows. Some historians believe it was this palace that inspired Buckingham to build Thornbury Castle and this could be where he got the idea of having oriel windows from. ...read more.

This only heightened Henry's suspicion of him when he was accused of treason. Conclusion House building is a very personal matter so the only person who really knows the purpose of Thornbury Castle would be Buckingham but looking at my evidence I don't think Thornbury Castle was built with a serious purpose of defence. K.B. McFarlane considered Thornbury indefensible and regarded the military features "only as romantic adjuncts of nobility." And Colin Platt believes it's "scarcely a fortress in anything but name." W.D. Simpson calls Thornbury "the last great baronial house in England to be built in the old castellated style, retaining something of the serious purpose of medieval fortification." This shows there are many different views on the purpose of the Castle but I agree with A.D.K. Hawkyard who points out "the oriel windows and the side gate without a portcullis suggested that Thornbury was not designed as a centre of war and rebellion." On the other hand the military features might well have withstood a small-scale emergency. I don't think he built the barracks because he was plotting to seize the throne. Instead they were for housing the armed forces he took with him to collect his rents, or in the chance of a rebellion from his Welsh tenants it would offer him some protection. In conclusion I think Buckingham built Thornbury Castle to show off his wealth but added defensive features as he was worried about a rebellion from his tenants in Wales. ...read more.