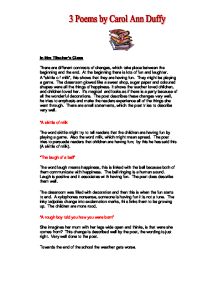 In Mrs Tilscher's Class There are different contrasts of changes, which take place between the beginning and the end. At the beginning there is lots of fun and laughter. A "skittle o f milk", this shows that they are having fun. They might be playing a game. The classroom glowed like a sweet shop, sugar paper and coloured shapes were all the things of happiness. It shows the teacher loved children, and children loved her. It's magical and looks as if there is a party because of all the wonderful decorations. The poet describes these changes very well, he tries to emphasis and make the readers experience all of the things she went through. There are small statements, which the poet tries to describe very well. "A skittle of milk The word skittle might try to tell readers that the children are having fun by playing a game. Also the word milk, which might mean spread. The poet tries to persuade readers that children are having fun; by this he has said this (A skittle of milk). "The laugh of a bell" The word laugh means happiness, this is linked with the bell because both of them communicate with happiness. ...read more.

Children started to be more rood. Also towards the end, the weather changes, as it is fiercer towards the end of the school year. Valentine * An onion is unusual about the poet's choice of a valentine gift. It's not the usual red rose or satin heart. "Not a red rose or a satin heart" It has a shape, which is equivalent to a sphere. It also has a brown substance, which is wrapped around it. The onion is very unusual but has lots of meanings as well as feelings for the person that will receive it. You look forward to having it because, "It promises light" * This particular gift was chosen because it means a lot for the person who receives it. It promises light. Brightness and positive vinculum together, that's why this gift has been chosen. "Like the undressing of love" This means that you can take your clothes off and start love, this is similar when the to the onion, when it has it's brown paper taken of it. It contains lots of different layers. * There are several different affects that the person will receive. ...read more.

He said, he weighed a ton. There is some sort of vinculum between the thief and the snowman. He also takes him so children would cry in the morning. Knowing that the snowman has gone he likes to hurt children. "Part of the thrill was knowing that children would cry in the morning. Life's tough" * The poet presents the ideas convincingly step by step; he explains what the thief does and what he thinks of the snowman. "Sometimes I steel things I don't need" The poet first writes down what he does need but doesn't say that, then he comes across what he doesn't need, all of which is only for entertainment. The poet makes the thief answer as if someone is asking a question. "I took some time" The poet also writes what the thief thinks of himself. "Mostly I'm so bored I could eat myself" This shows that he has nothing to do; the poet at the end convinces readers that the thief is telling the questioner what he has said. "You don't understand a word I'm saying do you?" This suggests that only the thief knows what he is doing and saying. It also suggests that he is completely different from other ordinary humans. ...read more.