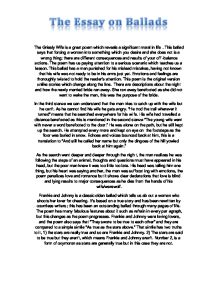 Three Traditional Ballads - The Griesly Wife, Frankie and Johnny and The Ballad of Charlotte Dymond.

The Griesly Wife is a great poem which reveals a significant moral in life. This ballad says that forcing a woman into something which you desire and she does not is a wrong thing; there are different consequences and results of your off-balance actions. The poem has us paying attention to a serious scenario which teaches us a lesson. This ballad has a man punished for his mislead mistakes, having not known that his wife was not ready to be in his arms just yet. Emotions and feelings are thoroughly twisted to hold the reader's attention. This poem is the original version unlike stories which change along the line. There are descriptions about the night and how the newly married bride ran away. She ran away barefooted as she did not want to wake the man, this was the purpose of the bride. In the third stanza we can understand that the man tries to catch up with the wife but he can't. As he cannot find his wife he gets angry. "He trod the trail wherever it turned" means that he searched everywhere for his wife. His wife had travelled a distance barefooted as this is mentioned in the second stanza "The young wife went with never a word barefooted to the door." ...read more.

Those few words tell us a basic definition of the truth. A few sentences down the ballad talks of Frankie's life in jail, it mentions that she has no luxury in there. She says "there ain't no good in a man. I had a man but he done me wrong." Her punishment was to sit in the electric chair and she was waiting there restlessly to go and meet her god. The last few lines of the poem say "This story has no moral, this story has no end, this story only goes to show that there ain't no good in men." This is similar to The Griesly Wife because in both ballads there is a couple in the start but, in the end there is only half of the jigsaw left. In both poems one of the two goes on the search for the other, and both poems end in a punishment, in this poem the electric chair is used and in The Griesly Wife, murder was involved. The last ballad which I am going to compare is The Ballad of Charlotte Dymond. "Charlotte Dymond, a domestic servant aged eighteen, was murdered near Rowtor Ford on Bodwin Moor on Sunday 14 April 1844 by her young man: a crippled farm-hand, Mathew Weeks, aged twenty-two. ...read more.

that sentence alliteration made sure we were back to reality, it released the ballad from the dream that personification and style were drawing. The poem says that Mathew was summoned in court and he backed up his victim and described her like natural imagery. "That round her neck I drew." He said this in his explanation to the court. It says "The only sin upon her skin is that she loved another." This was the reason why he decided to kill his beloved Charlotte. Another technique was then used called Oxymoron and here is how it was used "They sent him smartly up to heaven and dropped him down to hell." In the last paragraph, the standard remained high as alliteration was produced, "Where stands the sacred snow." & "And the salt sea-winds go." This poem was highly unique but again there were several similarities, in all the poems there was a man and woman but one of them got killed. Rhyme was used in every paragraph in all the poems. This is my personal opinion, the ballad that I really enjoyed reading was The Griesly wife as it was short and catchy and it seemed to be really straightforward, horror was used in the end of the poem and this became the heart of the poem, I liked the rhyme and it all did the job. ...read more.