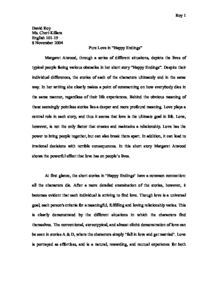 David Roy Ms. Cheri Killam English 101-19 8 November 2004 Pure Love in "Happy Endings" Margaret Atwood, through a series of different situations, depicts the lives of typical people facing various obstacles in her short story "Happy Endings". Despite their individual differences, the stories of each of the characters ultimately end in the same way. In her writing she clearly makes a point of commenting on how everybody dies in the same manner, regardless of their life experiences. Behind the obvious meaning of these seemingly pointless stories lies a deeper and more profound meaning. Love plays a central role in each story, and thus it seems that love is the ultimate goal in life. Love, however, is not the only factor that creates and maintains a relationship. Love has the power to bring people together, but can also break them apart. In addition, it can lead to irrational decisions with terrible consequences. In this short story Margaret Atwood shows the powerful effect that love has on people's lives. At first glance, the short stories in "Happy Endings" have a common connection: all the characters die. ...read more.

It reassures him that though he is aging, he still possesses a certain charm and is able to provide sexual fulfillment. John is content with balancing two relationships until jealousy consumes him and provokes him to kill both Mary and her lover, as well as himself. These examples effectively show contrasts in the criteria for love, which in fact is each character's ultimate goal. It can be observed in this story that love is very powerful, so much so that it can drastically alter lives. Love can also lead to irrational decisions with horrific consequences. Atwood uses two distinct examples in "Happy Endings" to confirm this notion. Story B presents the character Mary, a woman madly in love with John. John, however, feels no emotion towards Mary, but rather "uses her body for selfish pleasure and ego gratification of a tepid kind.(Atwood)" Mary loves John so much that she has sex with him twice a week, despite the fact that she does not enjoy the act. "She acts as if she's dying for [sex] every time, not because she likes sex exactly." ...read more.

One day John walks in on Mary and James and is shocked and shattered. John loved Mary so much that he could not fathom that she would cheat on him, despite the fact that he himself was being unfaithful. Instead ending his relationship with Mary and continuing his life with Madge, he purchases a gun and kills Mary, James and himself. It is evident that love played an essential role in the irrational decision he made. If he had not loved Mary so much, he would not have been so profoundly shaken by Mary's relationship with James. John was so upset by their relationship that selfishness consumed him: he did not consider his family when murdering and committing suicide. His own needs became his priority. Love caused his logic and sensibility to fail him, and provoked him to commit monstrous acts that destroyed many lives. Through analysis of "Happy Endings" by Margaret Atwood, it can be concluded that one of her many intended lessons was to show the value and the powerful effects of love. Atwood successfully proved this lesson by using powerful examples of both successful and disastrous relationships to illustrate the positive and negative effects of love. Atwood truly demonstrated what it is like to follow your heart. ...read more.