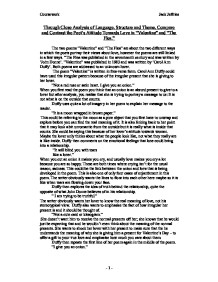 Through Close Analysis of Language, Structure and Theme, Compare and Contrast the Poet's Attitude Towards Love in

Through Close Analysis of Language, Structure and Theme, Compare and Contrast the Poet's Attitude Towards Love in "Valentine" and "The Flea." The two poems "Valentine" and "The Flea" are about the two different ways in which the poets portray their views about love, however the poems are still linked in a few ways. "The Flea was published in the seventeenth century and was written by 'John Donne'. "Valentine" was published in 1983 and was written by 'Carol Ann Duffy'. Both poems are addressed to an unknown lover. The poem "Valentine" is written in free-verse form. Carol Ann Duffy could have used this irregular pattern because of the irregular present that she is giving to her lover. "Not a red rose or satin heart. I give you an onion." When you first read the poem you think that an onion is an absurd present to give to a lover but after analysis, you realise that she is trying to portray a message to us: It is not what is on the outside that counts. Duffy uses quite a lot of imagery in her poem to explain her message to the reader. "It is a moon wrapped in brown paper." This could be referring to the moon as a pure object that you first have to unwrap and explore before you can find the real meaning of it. ...read more.

This suggestion is explaining that there is something dangerous or threatening about love once it leads to marriage, as it is more serious than just a normal relationship. Throughout the poem a conceit or extended metaphor is another one of the techniques that is used by Duffy. She keeps on linking back to the onion with whatever she says. It is a very unusual item to be linked with love, the same as the item that Donne uses to link with love and also use as a conceit: A flea. Donne was a member of a group called the metaphysical poets. They all wrote poems for each other. This could be a reason why you don't know who Donne is writing his poem to, as only the group would have known whom this poem was written to and that could have been how Donne wanted to keep it. Donne's poem is different to Duffy's poem as it is about a man just wanting to get his girlfriend into bed whereas Duffy's is about the true meanings of love and Valentine's Day. It is also written in a very regular pattern (unlike Duffy's) with nine lines in each stanza. The rhyming also has a very regular pattern. ...read more.

Donne then goes on to question his lover about how the flea could possibly be guilty enough to deserve such a punishment. "Wherein could this flea guilty be, Except in that drop which it suck'd from thee?" This is implying that the flea can't possibly be guilty because all it has done is suck a drop of blood from his lover and that is what all fleas do. Donne then again emphasises the idea that now because of the flea's death some life has been taken from his lover. "Will waste, as this flea's death took life from thee." This puts forward the idea of some life being taken from his lover because part of her was contained inside the flea. At first the two poems appear very different but after close inspection links can be established between the two poems. I think Carol Ann Duffy's poem is the more serious of the two as she is using an unusual item to portray her feelings for her lover. John Donne is just worried about getting his lover into to bed using the idea of the flea instead of wanting to portray his feelings towards his lover. He is too overconfident with himself that he will get the girl into bed with him when in the end he doesn't succeed. Coursework Jack Jeffries - 1 - ...read more.