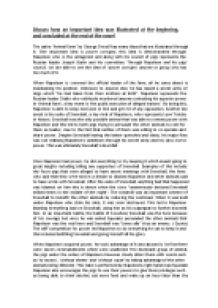 Through Napoleon and his pigs council, we are able to see the idea of power corrupts

﻿Discuss how an important idea was illustrated at the beginning, and concluded at the end of the novel The satire ?Animal farm? by George Orwell has many ideas that are illustrated through it. One important idea is power corrupts; this idea is demonstrated through Naopleon who is the antagonist and along with his council of pigs represents the Russian leader Joseph Stalin and his committee. Through Napoleon and his pigs? council, we are able to see the idea of ?power corrupts? anyone or group who has too much of it. When Napoleon is crowned the official leader of the farm, all he cares about is maintaining his position. Unknown to anyone else, he has raised a secret army of dogs which ?he had taken form their mothers at birth?. Napoleon represents the Russian leader Stalin who ruthlessly murdered anyone contesting his superior power. In ?Animal farm?, a key event is ?the public execution of alleged traitors?. ...read more.

In an important battle, the battle of Cowshed, Snowball was the hero because of his courage but once he was exiled Squealer persuaded the other animals that Napoleon was the real hero and Snowball was ?Jones ally? thus an enemy. ( Quote) The stiff competition for power led Napoleon to do everything he can to keep it and this included belittling Snowball and giving himself all the glory. When Napoleon acquired power, he took advantage of it and abused it. At first there were seven commandments which were unaltered. The dominant group of animal, the pigs under the orders of Napoleon however slowly alters them with words such as ?to excess?, ?without sheets? and ?without cause? by taking advantage of the other animals being illiterate. This take is performed by Napoleons right hand man Squealer. Napoleon also encourages the pigs to use their powers to give them privileges such as being able to drink alcohol, eat more food and wake up an hour later than the other animals. ...read more.

Mr Pilkington a neighbouring farmer when he is invited onto the farm says to Napoleon?I congratulate you for running a farm crueler than I can?. Clover is the mare in the book that prevents it from turning into a dry satire; by the end through her thoughts we are able to see ?there is no difference between the humans and the pigs?. At first the Napoleon has limited power over the other animals due to Mr Jones being in charge of the farm. However after the revolution on the farm, the pigs under Napoleon are then able to seize advantage of the situation, they also use their vast knowledge and education to control the other animals and become more and more dominant as time passes by. Napoleon and the pigs not only break the laws of Anamalism set by old Major but they also do everything they can to attempt to keep the power they gained. This shows that power is able to corrupt those individuals or groups with too much of it. ...read more.