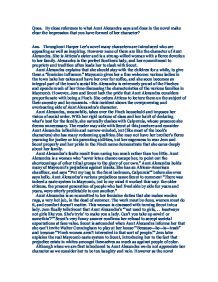 Throughout Harper Lee's novel many characters are introduced who are appealing as well as inspiring. However none of them are like the character of Aunt Alexandra

Ques. By close reference to what Aunt Alexandra says and does in the novel make clear the impression that you have formed of her character? Ans. Throughout Harper Lee's novel many characters are introduced who are appealing as well as inspiring. However none of them are like the character of Aunt Alexandra. She is Atticus's sister and is a strong-willed woman with a fierce devotion to her family. Alexandra is the perfect Southern lady, and her commitment to propriety and tradition often leads her to clash with Scout. Aunt Alexandra explains that she should stay with the children for a while, to give them a "feminine influence." Maycomb gives her a fine welcome: various ladies in the town bake her cakes and have her over for coffee, and she soon becomes an integral part of the town's social life. ...read more.

she has many redeeming qualities. She may not have her brother's fierce yearning for justice or his parenting abilities, but her eagerness to rear Jem and Scout properly and her pride in the Finch name demonstrate that she cares deeply about her family. Aunt Alexandra's faults result from caring too much rather than too little. Aunt Alexandra is a woman who "never lets a chance escape her, to point out the shortcomings of other tribal groups to the glory of our own." Aunt Alexandra holds many of Maycomb's prejudices against blacks. She has an African-American chauffeur, and says "'Put my bag in the front bedroom, Calpurnia'" before she even says hello. Aunt Alexandra's various prejudices cause Scout to comment "There was indeed a caste system in Maycomb, but to my mind it worked this way: the older citizens, the present generation of people who had lived side by side for years and years, were utterly predictable to one another." ...read more.

Jem later explains the real Maycomb caste system to Scout, introducing her to the fact that prejudice exists in whites amongst themselves as much as against people of color. Although when we are first introduced to Aunt Alexandra we do not appreciate her character as we consider her to be too haughty and vain. However as the novel progresses her character develops and we learn that although Aunt Alexandra might be arrogant sometimes, she is very caring especially when it comes to her family. This is obvious when after losing Tom Robinson's trial when Atticus and the children return home, for the first time ever Aunt Alexandra refers to Atticus as 'brother'. This sign of loving tenderness and endearment has never been shown by Aunt Alexandra and at this point the reader realizes that behind all the pride lies a sweet and loving personality a side that she does not show that often through out the novel. Words: 684. ...read more.