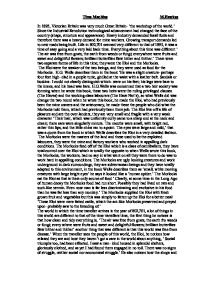 Time Machine M.Hawkes In 1895, Victorian Britain was very much Great Britain- 'the workshop of the world.' Since the Industrial Revolution technological advancement had changed the face of the country (shape, structure and appearance). Heavy industry demanded fossil fuels and therefore there was a heavy demand for mine workers. Growing transport demands led to new roads being built. Life in 802,701 seemed very different to that of 1895, it was a time of easy going and a very laid back time. Everything about this time was different ' The air was free from gnats, the earth from weeds or fungi; everywhere were fruits and sweet and delightful flowers; brilliant butterflies flew hither and thither.' There were two separate forms of life in this time; they were the Eloi and the Morlocks. The Eloi were the weaker of the two beings, and they were used as food for the Morlocks. H.G. Wells describes them in the book 'He was a slight creature- perhaps four feet high- clad in a purple tunic, girdled at the waist with a leather belt. Sandals or buskins- I could not clearly distinguish which- were on his feet; his legs were bare to the knees, and his head was bare. H.G.Wells was concerned that a two heir society was forming when he wrote this book, these two heirs were the ruling privileged clauses (The Haves) ...read more.

The Morlocks supplied the Eloi with fresh grown fruit and vegetables but this was simply to fatten up the Eloi for a better meal 'These Eloi were mere fatted cattle, which the ant-like Morlocks preserved and preyed upon- probably saw to the breeding of.' The world in which the time traveller arrives is the year of 802,701, a lot of things in this world are different to that of the time travellers time, the first thing he notices is that how clean and tidy everything is, 'The air was free from gnats, the earth fro weeds or fungi; every where were fruits and sweet and delightful flowers; brilliant butterflies flew hither and thither' another thing that was different is that this world was free from disease.' When the traveller sees the people of this world, the Eloi, he notices how relaxed they are and how they haven't got a care in the world about anything, ' Social triumphs too, had been effected. I saw a man- kind housed in splendid shelters, gloriously clothed, and as yet I had found them engaged in no toil. There was no signs of struggle, neither social nor economical struggle.' He also notices how the shops and traffic had gone 'The shop, the advertisement, traffic, all that commerce which constitutes the body of our world, was gone.' ...read more.

His third and final stop before 802,701, is probably the most significant feature of the whole film and it reveals the most about the mood in Britain at the time of making this film, the traveller stops on August 18th 1966, and the world is involved in atomic warfare, 'Atomic satellites are zeroing in,' and the time traveller, initially is impressed by the 'gigantic strides that mankind has made' is devastated to see the catastrophic effects of atomic war, 'The labours of centuries gone, in an instant.' The Time Machine is about a man who is a scientist and he wants to see what the future holds for humans, he builds a time machine. The time traveller stops off at various different points in the future but he ends up in the year 802,701 where he finds that the way of life is extremely different, he finds out that there is two distinct species, the Eloi and the Morlocks. He sees how the Eloi are treated as food for the Morlocks and how the Eloi have a life of luxury on the surface whereas the Morlocks are the hard workers working the machines underneath the ground. The time traveller is disgusted with what he sees and is devastated that this is how humans will live in the future, the time traveller stays and helps the Eloi defeat the Morlocks, as he doesn't like the way things work in this life. ...read more.