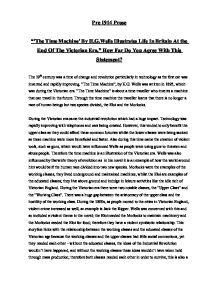 Pre 1914 Prose "'The Time Machine' By H.G.Wells Illustrates Life In Britain At the End Of The Victorian Era." How Far Do You Agree With This Statement? The 19th century was a time of change and revolution particularly in technology as the first car was invented and rapidly improving. "The Time Machine", by H.G. Wells was written in 1895, which was during the Victorian era. "The Time Machine" is about a time traveller who invents a machine that can travel in the future. Through the time machine the traveller learns that there is no longer a race of human beings but two species divided, the Eloi and the Morlocks. During the Victorian era came the industrial revolution which had a huge impact. Technology was rapidly improving with telephones and cars being created. However, this tended to only benefit the upper class as they could afford these common luxuries whilst the lower classes were being sacked as these machine were more beneficial and faster. Also during this time came the creation of violent tools, such as guns, which would have influenced Wells as people were using guns to threaten and abuse people. Therefore the time machine is an illustration of the Victorian era. ...read more.

Wells portrays the Morlocks as "stooping white creatures" living in the "impenetrable darkness." This description reflects upon the working class citizens of that time, whose backs were hunched due to constant hard labour in small, cramped conditions such as mines underground which exaggerates the fact that the Morlocks lived in darkness underground. The Morlocks are also depicted to be less than civilised as Wells says "Rayless obscurity" they allude to prehistoric forms of human beings e.g. Darwin's theory suggests we are the descendants of primates and the Morlocks have similar characteristics. Therefore the time machine is an illustration of the Victorian era and follows on from wells' belief in Darwinism. The novel gives us an insight on the symbiotic relationship between the upper class and the working class where the upper class provide jobs for working class in their factories and the working class provide the upper class with labour to allow them to experience life's luxuries. The novel speculates on the scientific development of the two classes into their own species so the upper class develop into these small, delicate and frail Eloi's and the working class develop into these stooping, powerful and large Morlocks. The novel also considers the scientific advances in technology through time travel. ...read more.

the director modernised the old fashioned language as he knew people of this period wouldn't understand the language of the Victorian era. The novel possesses much more description and contains an embedded narrative where the narrator is writing a story that has been verbally told to him and the narrative has no more detail than you might expect from a story told to you by a friend. In conclusion I agree with the statement that Wells illustrated life in Britain at the end of the Victorian Era. I think this because H.G. Wells did use some examples to illustrate life in Britain from the things going on in the world around him, such as Darwin's Theory of Evolution, the relationship between the rich and poor of the Victorian age and also Jack the Ripper which influenced him to write a violent theme in his novel. He also included all this but extrapolated them in other ways so that his novel was different to the Victorian era yet somewhat familiar as it was an extract of Victorian life extended into the distant future. Finally, it reflects upon the illuminated Victorian thinking. Even if time travel is not possible and we can not access the fourth dimension of time one man thought hard enough and asked us all, What If? By Ryan Scuffil ...read more.